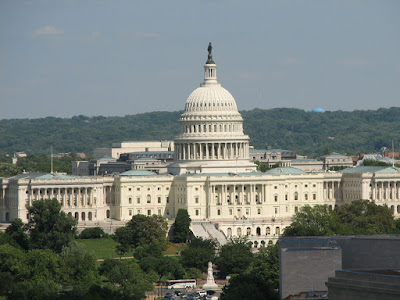 Washington, DC—With 535 overpaid opportunists controlling our tax money the American experiment is about to crumble. The American taxpayer has lost control over his government well beyond the point of enslavement.

Communists, socialists and a vast voting block of hyper-breeding, entitlement addicted parasites have stolen our freedom and destroyed the American way of life.

This destruction of a once great nation where everyman had a birthright to the American dream has evaporated.

Politicians campaign on a pledge that they will protect the taxpayers and once elected take an oath to protect and defend the Constitution. That changes instantly as they sell out and pander to Wall Street bankers and anyone feathering their beds. These political whores enter the halls of congress as middle class Americans and become multi-millionaires overnight.

Even some of the so called “Tea Party” politicians have already fallen under the spell of cold hard cash leaving their principals in the dirt. The majority in Congress are doing what they do best, extorting from the population.

Carrying the Party title of Republican has only become a vehicle used to confound and fool naïve voters.

The business of the government budget is a simple one that’s been complicated into a criminal conspiracy to bilk and defraud the working class population. Taking on endless debt to pay for things we don’t want or need to the detriment of the deserving is what has happened.

Our politicians have chosen to comprise away their self-respect to make deals with the devil so they may enjoy wealth most Americans will never dream about.

We have reached the point where American taxpayers need to simply say no and refuse to feed the monster. They can’t spend what we don’t send them. They can’t make war on taxpayers with an unfunded and hungry Army. The monster must be starved into submission or we can have a Civil War.
Posted by Paul Huebl Crimefile News at 8/01/2011 02:32:00 PM

Email ThisBlogThis!Share to TwitterShare to FacebookShare to Pinterest
Labels: Tryanny

You’ve got a point, probably the only thing that will get their attention is a tax revolt. However, that is a hell of a leap from going to a Tea Party rally. They will react violently to a tax slave uprising.

PS: They may have raised the debt limit but there is no one in the world able to lend us another two trillion dollars. They will nationalize our retirement funds and force us to invest it in worthless government bonds. We should expect that after the election no matter who is elected.

This is the next step. All pension funds will be required by law to invest only in US Treasuries. A bill has already been proposed. Next, all IRA's will be required to do the same. All US assets will be sold off. Coup d'etat!

Americans you have got to get mad...

"You’ve got a point, probably the only thing that will get their attention is a tax revolt. However, that is a hell of a leap from going to a Tea Party rally. They will react violently to a tax slave uprising."

This violence must be met with our own irresistible violence.