Is A Tax revolt Overdue in America? 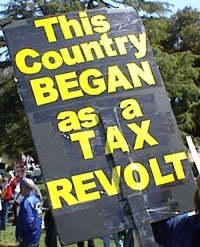 Americans have seen their 401K’s and pension plans decimated. We all knew that the Roosevelt created Social Security Ponzi scheme would fail. The death of Social Security was accelerated by the inclusion of millions of young substance abuses that have found SSI to be a lifetime free ride.

The government has grown much faster than even the population padded by the refusal of our officials to enforce our immigration laws. These same officials and politicians have knowingly and intentionally imported crime, poverty and drugs to destroy the American way of life.

The government officials have endlessly polluted and padded the voting rolls to favor Socialist candidates. Taxpayers are hopelessly outnumbered at the polls by professional entitlement users and abusers.

I have heard so many people say it’s time to shed blood fighting for liberty once again. They are serious and the massive sale of firearms and ammunition during the last several years bolsters that idea. People know their freedom is in serious danger as their elected representatives continuously lie to them during their political campaigns.

The have created a Drug War that has only been effective in destroying the lives of innocent people killed wounded or falsely arrested in botched drug raids.

The halls of or Congress are filled with tyrants, Socialists and White Collar Thieves. There is a Communist traitor in our Whitehouse making policy with an unelected and un-vetted cabinet with obvious designs on forming a dictatorship.

Americans can wage war that would be catastrophic and destroy families in the process as war always does. Americans can also simply defund the enemy and that will eliminate their tyranny.

Unlike the voters taxpayers have enormous power. Imagine if every business refused to send in quarterly payment to the IRS. The IRS could do nothing to stop a tax revolt. They would try for a while but without funding IRS workers would be out looking for honest work.

We are embroiled in three wars most Americans don’t support. The endless and impossible task of sorting good Muslims from the bad is a waste of good money, time and our brave children’s blood.

Let me make it clear, I’m only floating a question here. Is there a better way to rein in our rogue government than with the specter of another awful Civil War?

Don’t forget to mention the President’s aunt, an illegal alien living in public housing and collecting Social Security – two years after it was reported on even in the bias propaganda media.

You would think a man who made two million dollars last year would spend some of it to move his Aunt out of a ghetto and take her off welfare. But we’re not talking about an honorable man are we.

To address the question, there are still plenty of non-violent things we could be doing that we’re not. We should be hounding our representatives everyday. We should be following them around in public and shouting at them. We should make their lives a living hell with protests. Everyday there should be a picket line outside Dick Durbin’s office with shouts and signs demanding his resignation.

The lunch hour in the loop should become the protest hour in front of the federal building !