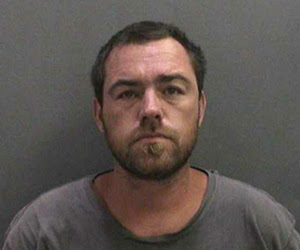 Newport beach, CA- Orange County Sheriff’s spokesman. Jim Amormino told a shocking story of 35-year-old Sloane Briles hitting and then throwing one of his children into the ocean off of a cruise ship. Witnesses said that Briles was arguing with a female companion and that argument ended with the assault on the little boy.

Briles soon jumped into the water himself in an attempt to rescue the boy but several passing boaters had already had intervened and one of them pulled the boy to safety. The child was reportedly uninjured but shaken-up by the attack.

Responding Sheriff’s officers had to subdue the combative Briles who was said to be intoxicated. Briles was booked on various charges and later released on bail pending his appearance in court.

Unfrickin' believable! Will someone just expend some extra ammo on this vermin already!

Hmm, Every cruise ship I have ever been on was like 90 ft above the waterline.

This was a smaller 85 passenger ship. Had it been one of the big ones this would have ended much different...