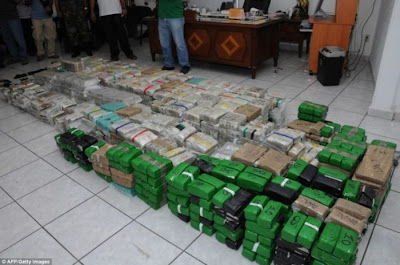 Washington, DC—They warned us that without a war on drugs our children would all be sticking themselves with dirty needles and dying young from overdoses. That scare tactic worked very well and the people manufacturing and peddling narcotics got very wealthy.

Along with the drug dealers, government contractors, prosecutors, judges, cops, corrupt politicians, drug treatment contractors and defense lawyers got really rich. That does not take into account the corruption by the so-called, good guys.

The artificially high price of narcotics is keeping criminals on both sides of the Drug War incredibly wealthy.

They billed the drug War as a life saver but just ask the families of the thousands murdered simply because we created, fertilized and perfected narcotics commerce, what they think.

If narcotics could be sold without restrictions they’d cost no more that sugar tea or coffee. The profits would diminish and put all the drug warriors out of business the very day the prohibition ended.

Contrary to what we’ve been told legalization will reduce, not expand experimentation with drugs by our children. The strongest attraction to narcotics experimentation is the fact that they are the forbidden fruit of our age. It’s only natural for humans to resist society’s rules.

In the meantime deadly drug violence will continue along with an endless supply of cash to both sides to the endless and unwinnable Drug War. The only war won so far was the one against our battered Bill of Rights.

Wack that nail on the head and hit it hard !

Let’s take the profit out of organized crime and legalize vice. Tax it, regulate it and make it safer for everyone. Let’s turn a tax-consuming junkie into a tax paying citizen – what an amazing idea !

Let’s make room in our prisons for those who belong there – Obama, Naploitano and every damn socialist politician from both parties.

When you say tax it you immediately create opportunities for massive government corruption. The same applies to people avoiding taxation.

I say keep the government strictly out of the recreational pharmaceutical business. Next you will ask for FDA approved crystal meth. I say let the buyer beware.

We lower the crime rate by keeping the price of that garbage dirt cheap. To do that we must keep the government far away.