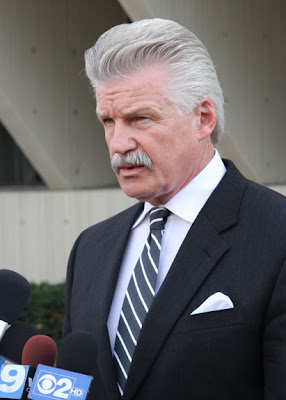 Joliet, IL—Gadfly Will County Prosecutor James Glasgow could not find a scintilla of evidence that implicates Drew Peterson in a crime. Peterson has been suspected in the disappearance of his fourth wife and the death of his estranged third spouse. That case was ruled an accident but reclassified years later when the fourth wife vanished.

Peterson has become a very unpopular man especially with middle-aged women. Peterson’s seems to move on to younger and prettier women rather than to watch an unappreciative wife get old and unattractive. That alone makes him worse than a murderer in some people’s eyes. That however does not make him a killer.

Glasgow’s zeal found fertile political hay in getting the so-called "Drew Peterson Law" passed by the Illinois Legislature that would allow gossip and hearsay testimony. Glasgow hopes to get the self-serving testimony admitted in Peterson trial by people seeking to cash in if Peterson is convicted.

The Illinois Legislature is well known for having more intellectually and ethically challenged members than almost anywhere. These dim bulbs passed the law that has now been challenged by of all people, James Glasgow. The trial court has refused to bend to Glasgow’s demands and the trial was put off indefinitely as the issues and Glasgow’s loss grind through the higher courts.

The punitive bail of $20 Million has kept Peterson, a career Bolingbrook, IL cop with over 30 years of honorable service behind bars since a Grand Jury was polluted with the hearsay material and returned a murder indictment.

After losing in the trial court and the Court of Appeals, Glasgow has now filed for review before the Illinois Supreme Court. That action could delay resolution for another full year.

Peterson has never been convicted of anything at all. That includes a totally bogus charge that Peterson possessed an illegal weapon. That weapon was Peterson’s carbine he used to protect the citizens of Bolingbrook as a SWAT team member. The court dismissed that charge that was nothing more than an abusive form of harassment.

Glasgow has proven he’s the Mike Nifong of the Midwest with this malicious prosecution he hopes will win him votes. The citizens of Will County need to remember Glasgow placed his political posture above the law and can be counted upon to do this again whenever it suits his purposes. You may be his next victim!

this guy looks like a narcissistic pretty-boy, trying to make a name for himself. The name he will succeed in making for himself will be "GOOF"

Peterson, guilty or not, would be free of jail today id he wasn't: A 1:Cop
2:White
3:Male

Personally, my intuition tells me that Drew Peterson is guilty of killing at least one of his ex-wives, if not more. However, I keep up with your blog, and I agree with you 100% that IF the criminal justice system is fair (which we all know it is not), Drew should be FREE on bond until the prosecutor can PROVE his guilt in court beyond a reasonable doubt, which will probably never happen.

Welcome to the world of insanity, and keep up your supply of guns and ammo! The appacolypse is near....