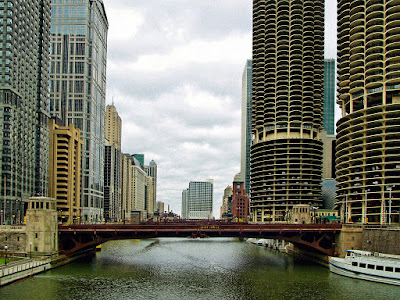 Chicago, IL—Just feet away from my old home (Marina City) a cowardly young African-American assailant fired a gun into the back of a man’s head. The victim was walking with friends to do some shopping in the area. This was on the State Street Bridge over the Chicago River. The gunman escaped Southbound.

Police believe they recovered a shell casing from the fired round and a backpack belonging to the gunman.

The unidentified victim is listed as critical condition in Northwestern Memorial Hospital.

The shooting so far seems to be another random act of violence perpetrated against White victims by African-American terrorists.

The law-abiding people of Chicago need to re-learn understand that they have an absolute birthright to enjoy the protection of our Second Amendment.

Understand you have more than a right but a duty to defend yourself, family, friends and neighbors. You have little choice but to take serious steps to end this violent trend. Get yourself a large caliber modern handgun and the training to use it for self-defense purposes. When confronted by either a small mob or any armed assailant, simply begin firing at them until the threat has ended. Warnings directed at you attacker/s to cease and desist are not required and may give your assailant the opportunity to kill you. Chicago's local gun laws are nothing more than weak and unconstitutional waste of paper.

Simply leave the scene for your own safety so you’re not further victimized by unseen accomplices. Contact a lawyer, not the police and tell nobody but your lawyer what happened. Watch the video below for my best advice.

My wife and I were walking to dinner when an unmarked unit drove past at speed to the scene of this. I was one bridge west of the Marina City bridge where this happened and watched more police arriving as they started to protect the scene. If the shooter and victim do not turn out to know each other, this is a truly shocking turn of events. Be interesting to see the spin the media put on it.

Excellent advise to follow if one becomes involved in a shooting. I for one will be following it to the letter.

Fully agree. But:
Is Citizen going to have training and skills comparable to a Law Enforcement officer, and will not be taken off guard, and will be able to draw and fire, and will have enough skill to prevent the M/1 horde from disarming him?
Is Citizen going to be willing to live through the nightmare of being arrested, and will be able to prove self defense in a legal system where it is almost preferable to be carried by 6 instead of being tried by 12?

If you are a Tourist in Crookago, Felon-ois, you ARE being watched. You WILL be a victim if the circumstances are right. Don't think you're safe here. It could be a fatal mistake.