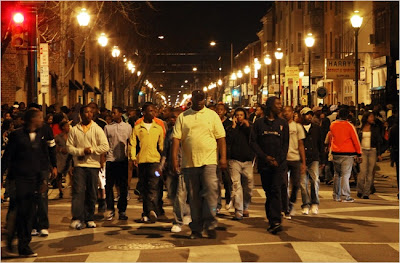 Milwaukee, WI—The Dairy state has always been more than generous with African- Americans since they came here in droves from their Southern birthplace to collect famously extravagant welfare benefits some 50 years ago.

African-Americans that migrated here went from being oppressed to being nurtured, tolerated and placed in the mainstream economically even if they did not seek employment. Today they still overwhelm the welfare rolls, jails and prisons. It’s not about skin color but the savage culture they’ve embraced. A huge segment of the African-American population thrives on hate, violence, thievery and drug abuse.

African-Americans have become a threat to the physical safety of White citizens in nearly every large city in America where they have a significant presence in the population. The latest flash mob attacks are racially motivated. The targets of the African-Americans are middle-class white people they overwhelm, beat, sexually molest and rob.

Yesterday the Wisconsin State Fair opened with scores of vicious and cowardly attacks on innocent White people by African-American mobs of thugs that rampaged through the midway and outside the grounds.

These events are contagious and malignant. White people need to take special precautions sine the media and government has failed to let them know about the danger in their zeal for political correctness. Ignoring the attacks invites more of the same.

You must always remember the police are controlled by politicians that suck up to the African-American votes. The big city politicians don’t want it to been seen that they won’t tolerate Black misbehavior.

American cities are showing the same signs as South-African nations after the apartheid ended. Soon the land confiscations, beatings, arsons, murders, rapes and robberies drove the White survivors into exile.
Posted by Paul Huebl Crimefile News at 8/05/2011 11:35:00 AM

I remember when I first started reporting the black on white crimes. People claimed I was picking on the blacks. I countered that charge by saying it is a cancer and when left unchecked it will be out of control. I was right.

Worse yet, few if any reporters will even mention race in these attacks.

It's time for an uprising and soon!

An uprising of what kind? Will whites simply begin lynchings again? Or is the real problem the criminal justice system, which continually provides criminals of any race "good time" in prison when in fact they haven't earned it at all?

Time to go Norwegian!!! Let's do it. This crap will continue until we show them a real downside to this bullshit.

Paul, You're old enough to remember how the Blacks turned that into a dangerous place that Whites had to abandon. It was shut dow as a result.

Paul, the Liberals have been making excuses for Blacks that can’t function in schools or employment for decades. There is little doubt that Blacks are an inferior animal like under-race. That equality crap is bogus. Races are different and our creator shortchanged this people of basic intelligence, decency and humanity. Saying that, there are superior examples of the Negro race but they’re too few and far between.

Perhaps it’s time to stop supporting them and let Darwin sort the mess out. Deporting them back to Africa would be a good start. They’d fit right in with the Negro savages already there that execute each other faster than Nazi’s murdered Jews.

This is a good reason why there should be national concealed carry.

Paul,you and I both know they are savages and their "leaders" do nothing but down play this violence.
Ive seen the savagery in the jets.
I got my quota of them there.(6) It was rough then but now...well its just out of hand because of the immunity they think they have because of the goof pretending to be president.

The cheesehead is a strange (and dumb) creature. They'd rather start arguments with a Person from illinois than defend their once-great state from the Africanus takeover. Dumb asses all voted for obama.

How many suburban fairs have been permanently shut down because of these animals? So long as the commies control the courts and the MSM this will continue.

I guess I need more than a 5 shot snub!!

We may be witnesses to a Biblical prophecy come true - 'And there shall be destruction and darkness come upon creation and the beast shall reign over the earth.'

See this and tell me these animals can function in a peaceful society.
http://www.cbsnews.com/stories/2011/08/06/earlyshow/saturday/main20089055.shtml
BTW, love the media here , failing to call them what they are.

interesting that the mainstream media rarely touches black on white violence. white on black violence however is the stuff of federal indictments and prison sentences. The system is now rigged against white people. Whether it is college scholarships, enforcement of hate crime laws, affirmative action in hiring and promotions, etc., you are at a disadvantage if you are white, especially if you are white and middle or working class. the wealthy white elite could give a shit about middle class and working class whites. they would rather give money to the NAACP than a fund for a cop shot in the line of duty. This country is fucked and the liberals fucked it. This is what it must've felt like to be a white, working class, South African in the mid eighties to early nineties. They knew they were fucked and they also knew they were powerless to unfuck themselves. it is a horrible predicament.

The social cancer has fully metastasized....Africanus would rather sit under a tree and watch the elephants all day than do a god damned thing to advance society. Africa is the cradle of civilization, the oldest place on earth yet there is no recorded history or evidence of structured society outside of the colonies. It's sad, scary, and real at once. We're doomed....we'll never make it.

The social cancer has fully metastasized....Africanus would rather sit under a tree and watch the elephants all day than do a god damned thing to advance society. Africa is the cradle of civilization, the oldest place on earth yet there is no recorded history or evidence of structured society outside of the colonies. It's sad, scary, and real at once. We're doomed....we'll never make it.