Why are TSA Screeners Showing up at Police Funerals? 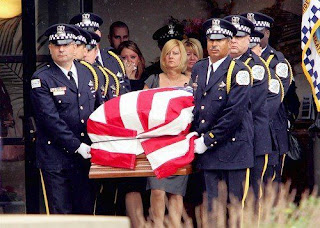 Chicago, IL—These days when a cop dies in the line of duty, the TSA pays their passenger and baggage screeners to attend the funeral as “members of the law-enforcement Family.”

They show up with black bands on their badges as they wear police style uniforms. TSA workers are not law-enforcement, nor do they have similar duties or any of the training. They are non-sworn civilians, who are marginally qualified to inspect the soiled underwear of air passengers.

Adding to this waste of our tax dollars is the sad truth that TSA workers have stolen guns from cops that entrusted their service weapons to them during routine travel.

If some TSA workers are so moved to attend a police hero’s funeral they should do this on their own time and without their uniforms.

If TSA workers want to become police officers they are free to do that but the vast majority can’t qualify because of inability to pass intelligence tests, background investigations and psychological screening. TSA workers have nothing what-so-ever in common with cops.

The sad truth is that the TSA workers are nothing more than part of a federal “jobs” program for the unemployable. They are so reminiscent of a horrible time in German history where undesirables were given brown shirt uniforms and encouraged to assist local police by a new federal, Nazi government. Even back then the professional German police all despised the brown shirted pretenders.

Understandably most cops have a very low opinion of TSA screeners and don’t want them at their funerals.

Homeland Security is a quasi-security outfit run by the Obama Federal Government. It is made up of the unsworn federal protective officers that have responsibilities such as watching video monitors and making sure federal employees don’t leave the coffee pots on after they leave. They are armed and answer to the property managers. They are not federal officers with the power of arrest. They are putting everything they can under that Nazi bitch Naploitano. Obama is following the Nazi model of creating his own force loyal to him rather than the people and our Constitution.

Paul, I had 30 plus years with CPD and have been retired over 8 years.I disagree with this post in that it/you paint all TSA screeners with the same brush. True, many should not be working for TSA for various reason, but the same could be said for the CPD. Many were hired because of political connections etc. I know the CPD sent the chosen few down to springfield for the police memorial (as a tour of duty). Certain officers get to go to the LOD funerals because it beats a tour of duty doing police work. Many of our former FOP officials never missed a springfield or DC trip, when the FOP (rank and file) was picking up the tab. Once they are out and would have to go on their own time and expense, as many of us do yearly, they just never make it.
In the past 20 or so years, police funerals have become a media event.
If you are going to criticize TSA for showing up at police funerals why don't you mention the politicians and other government phonies. They are the ones controling the purse strings, manpower issues, and safety concerns.

Armed protection officers with Homeland Security that are not law enforcement! But yet Chicago's Dept of Aviation Police which is certified law enforcement cannot be armed!!!! WOW