The Lost Sounds of Chicago Police 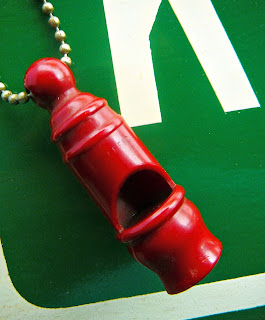 First is the old “Traffic Ace” whistle made by Sports, Inc that was located on North Broadway and Catalpa Avenues. The red one in the picture above is very rare. There were a lot of white ones but like mine most were black. There is no pea in an official Chicago police whistle.

That whistle became a musical instrument for the talented cops that could somehow master the thing. Cops could even recognize who was using the whistle by the tone and skill.

If there are any old geezers out there that still have the whistle and can play it I want to record that event for this blog.

The next lost sound was introduced under the O.W. Wilson administration. Wilson changed the patrol vehicles from black and white with red overhead lights to blue and white with blue overhead lights. The sirens were made to be significantly different than the fire department was using along with most of the world. A new mechanical siren was used but the difference was it had a baffle that made a really great sound.

If there was a 10-1 happening you knew help was on the way with those sirens. I suspect that that siren saved lives in that violent and armed offenders often fled as soon as that sound hit the air.

The new electronic sirens just don't seem to stir the excitement like the old mechanical one with the baffel.

Again I want to record that sound for this blog. Better yet I’d buy one of those sirens if I could find one somewhere.
Posted by Paul Huebl Crimefile News at 8/02/2011 03:34:00 PM

You're right about the sirens. Working a one-man car on days, I got in a fight with a guy with a gun at 90th and Exchange (just a block from the station). I called for help and heard those sirens come to life. Rene Hidalgo was first on the scene. The situation was quickly under control.

I'm sure the bad guy will remember that memorable day until he dies.

When did they switch from that livery to the craptacular stencil lettering now used?

Paul, this isn’t what you’re looking for, but please indulge me. Your article brought back some memories. When I was kid back in the 60’s there was an officer assigned to a foot beat in Logan Square. He’d often could be found directing traffic at the busy intersection of Diversey, Milwauke and Kimball during the rush hour. He could work that whistle like a symphony. I personally could never mastered the device myself.

I hope you find someone, that definitely is a lost sound of the city.

...you can get those whistles from china on ebay. 99 cents with free shipping.

Both the wife and I have our key rings in the desk drawer, black whistle, call box keys and two types of cuff keys....