Restaurant Takeover Robbers Get Help from the Business owners! 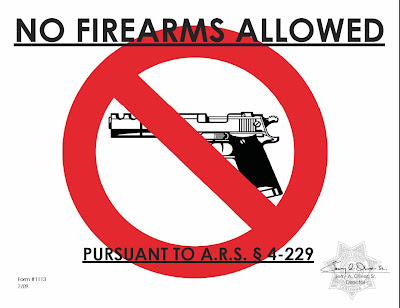 Phoenix, AZ—I personally lobbied at the Arizona Legislature on gun control issues for many years. I’d like to think the concealed weapon law that exists passed with my personal influence. Most of the language including the provision to keep the records private I wrote myself. The primary sponsor of that Legislation was the late, Dave Carson who served in the House of Representatives from Prescott. It was a hard fought battle that was nothing short of a stunning success.

People with the permits were stopping crimes and those people committing gun crimes never have the permits. Law enforcement officers are comfortable on traffic stops when motorists flash the permits. The law unquestionably enhances public safety.

Finally the law was amended so you can have dinner in a restaurant that serves alcohol and carry your permitted concealed weapon. You can even be present in a tavern provided you’re not drinking alcoholic beverages.

Bills to allow that passed before but were vetoed by the former governor who now serves as the Secretary for Homeland Insecurity with the new Marxist Obama administration.

Naturally there are a bunch of corporate fools that own restaurants that are simply afraid of concealed weapons. Fear of the unknown bothers a lot of people. The new law allows for these establishments to post signs banning firearms. The people with the permits will go simply go elsewhere but armed criminals will always go where they want regardless of Gun Free Zone signs.

Now the takeover robbers can be assured all of the law abiding people in these place are really unarmed. They can have their way with the staff and patrons without any interference. How nice! Let’s get the word out so the places without the gun prohibitions can be avoided by robbers, rapists and killers.

If you don’t care about guns either way or hate guns you will be safer if the place you patronize does not advertise they are a Gun Free Zone. Why would you dare put yourself and famlily at risk in these places? Would you put a sign on your own home advertising the occupants are unarmed?

By the way, if you consume alcohol while armed in these places it’s still a crime even with a permit. Guns and alcohol don’t mix well. This law is for sober people who have a right to protect themselves and families.
Posted by Paul Huebl Crimefile News at 9/29/2009 06:23:00 PM

I say ban and boycott these anti-gun establishments.

For places with a "no gun" policy, I will be pleased to take my business elsewhere.

What are the legal ramifications for carrying your ccw into one of these posted establishments??

Carrying a concealed weapon into a posted establishment would be low level misdemeanor. However the likelihood of discovery is highly unlikely unless the weapon was deployed. If it were a legitimate use of self-defense who cares?

The risk of being searched by police would be somewhat higher in a tavern than in a restaurant.

CF,thanks for the reply.Im not worried about detection,ive been carrying a handgun since I was 17.I dont telegraph,print or wear suggestive clothing.Todays LEOs are more in tune with traffic pimping than reading the street.

Im concerned that if i do have to pull it,or use it,in one of these places will I loose my CCW permit??