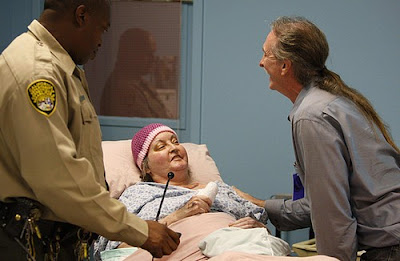 Atkins has been incarcerated longer than any other woman after her death sentence was vacated by the US Supreme Court, in Furman vs Georgia, 408 U.S. 238 (1972).

I’m lost on the benefit of continued imprisonment of this pathetic and helpless killer. Atkins will never survive to see the parole board ever again.

The only question that remains is can Atkins find redemption and salvation after the monstrous acts of a crazy, drugged kid under the influence of a maniac?

Forgiveness has never surfaced for Atkins from the living that are related to the innocent victims of the Manson Family.

Atkins will soon find out her fate when her own life expires shortly. If there is any truth to the beliefs held by religious teachings that there is a life after death Atkins may yet find her freedom.

The Parole Board came down hard on Atkins with a unanimous decision to deny parole. The denial of parole for Atkins sends a clear message to the rest of the Manson Family members that they can count on dying behind bars too.
Posted by Paul Huebl Crimefile News at 9/03/2009 06:27:00 AM

Email ThisBlogThis!Share to TwitterShare to FacebookShare to Pinterest
Labels: Manson

What, she can't go to Libya?
Oh, what a cruel system.

Sorry, but life in prison means just that.....life. She deserves the same mercy she showed her victims. At least she got more life in prison.

I think it is sad that this woman and the others are not given a chance We have people who have committed worse paroled daily but because their families were no one important and the victim does not have a Nasty Evil unforgiving sister running to each and every parole hearing the criminals get out and have Done Nothing to change. All these ladies have in fact done JUST that. This woman is Obviously in no way a threat why would it be that hard to allow her to leave prison she would go to a nursing home for sure why not allow her to get the care Proper car??
I lost my first husband to a murder while pregnant with our daughter so I DO understand this pain of the loss. But come on these ladies were high listening to a nut job. They deserve at least a chance at 60 years old.

This is an example of why Americans are thought of around the world as dumb barbarians. Civilized people have mercy and common sense. You spend a lot of taxpayer dollars imprisoning people to protect society and rehabilitate them. She clearly has been rehabilitated and is not a danger to society. I just don't get the point of squashing a bug. She's paid her debt. She's dying and can't get up! What good does it do to shackle a paralyzed leg to a hospital bed, pay an officer to watch her not get up, and pay for all of the medical care do? This is simly nuts! Vengence goes only so far. Yes her crime was horrendous. However, she was a brainwashed drug-crazed mad woman at the time. Does she deserve the same fate as Manson himself? She's only being treated this way because Americans are so barbaric. We are the laughing stock of the rest of the world with 40 X more prisoners per capita than any civilized country. We apparently prefer to warehouse paralyzed dying invalids instead of putting rehabilitation in the forefront.

what goes around comes around, eventually. Oh, by the way, Rot in Hell Bitch!!!