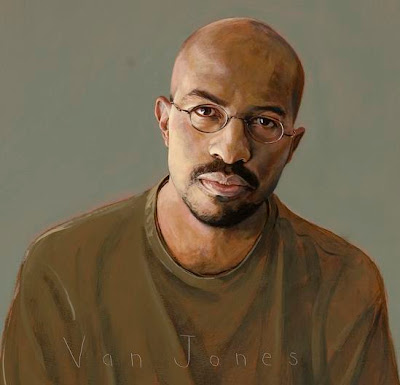 Their primary Czar qualification seems to be devotion to Barack Obama and Socialism. They nearly all came from the unemployed ranks of Left Wing political hacks. These unelected and un-vetted people have no place in policy making roles affecting American’s lives.

These people have not and could not pass a simple background investigation for a security clearance.

I see their role as more ominous and secretive. At what point, does our Commander and Chief delegate more responsibilities on these appointees that are not even sworn to an oath to defend and protect the Constitution? Are these Czars there for when regular cabinet members balk at Obama’s commands?

As for Van Jones, he claims to be a victim of a racist smear campaign. The problem with his allegation is the smears came from his very own media sound bites and that ridicules petition claiming Bush blew up the World Trade Center. Van Jones shows all the attributes of a Holocaust denier.

I somehow suspect that Van Jones considered himself as the future architect of the Obama Administration’s Final Solution to The Conservative Problem.

Good riddance Van Jones, please go slither back under the rock you came from.

Have a good laugh watching the NBC Obama Supporters addressing this event:

Paul since ur the pi in the forefront of this buffoon why don't u do a comrehensive editorial on him. ONE article including his alleged criminal background as well as convictions. Including uploading audio bites of comments from others that uve interviewed. Seriously do a hard core in depth one time exclusive piece on this racist.

This will put you in the front of all bloggers and your colleagues too.

That job was adequately done by Glen Beck and his capable producers at FOX NEWS.

I wish I had the budget to go after all of them! Get me some funding and I will send them all to Hell!

Not once did they address or attack what this Van Jones said. They focused their attention on the errornet attempting to make it appear as if he didn't say or do the things attributed to him. The fact that they didn't questoion him as opposed to attacking the internet speaks volumes about them, what he had to say and the media bias that does exist.

What Brokaw neglected to add in his statement, was that information on the internet needs to evaluated JUST AS THE TRIPE THAT IS SPEWED BY NBC AND THE OTHER MEDIA OUTLETS NEEDS TO BE EVALUATED. All information, regardless of source, is suspect.

It cracks me up that the media whose fawning over Obama and whose failure to point out Obama's fascist tendencies, now seem unable to accept the one outlet by and for the people.

What a sick joke.