Hey Liberals, What About That Patriot Act? 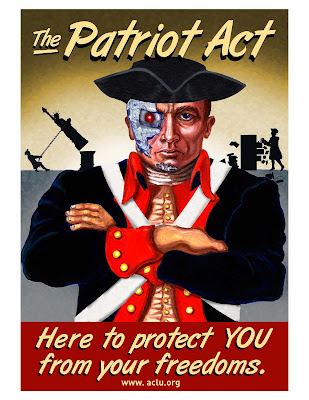 Washington, DC—It was called The USA Patroit Act. That gave government special powers to snoop into our private affairs to sniff out terrorism. The Liberals rightly decried this raw government power as way too Orwellian. The erosion under this abomination to our Fourth Amendment is mind numbing.

Now the Liberals are totally in charge and they’ve not lifted a finger to reverse this horror. In fact they've given Homeland Security a blank check to obtain whatever resources they want to take advantage of this nefarious power.

The Patriot Act supporters claimed it was needed for the investigation of foreign suspects operating within our borders. The Act’s detractors said it would be abused to go after Americans. The reality is that government as always will misuse any power they’re given.

The Patriot Act was just one of many un-American things done by George W. Bush who was wrongfully associated with Conservatives. We can’t forget that Bush started the TARP crap that rewarded the failing corporations and their crooked CEO’s. Bush was a lot of things but Conservative was not one of them.

Now that the Liberals have nearly absolute power they are silent about the Patriot Act. I guess it’s really all about who’s got control. Since when were Liberals ever really concerned about American’s privacy anyway? I guess Liberals only complain when their opposition has the power. Perhaps the Liberals are not so Liberal after all.
Posted by Paul Huebl Crimefile News at 9/10/2009 03:35:00 AM