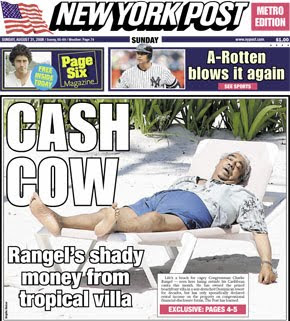 All over the country voters that had tough questions about bailouts and Obamacare were belittled, insulted and shoved around by thugs at Town Hall meetings.

Despite nearly every poll showing upwards of 60% of the voter did not want the huge Obamacare bill that was not even read by Congress, they passed it anyway plunging Americans into massive debt.

Under Obama, Pelosi and Reid the United States Government became a secret Soviet style regime. The men and women in our Congress arrogantly reinforced the wall between themselves and Americans. They live under one set of rules and force us to live on another.

Congress has lost its way. Instead of representing the people in their districts they represent campaign contributors from any organizations from all over the world. Money talks, not the humble voters.

Congress was intended to be formed with low paid, part-time public servants, who would come in from their districts to reflect the local attitudes in Washington. Once they debated and voted they’d return to their districts and live on the economy they have been controlling.

Today these are full-time career politicians that freely burn the tax dollars they order confiscated from American family food budgets. The travel, non-stop partying and narcissistic lifestyle of our congressmen and women are as addicting as any drug. That addiction is fed in every conceivable way by lobbyists and special interests that include foreign governments.

That Mr. Smith goes to Washington fighting for what’s right image just does not happen in the halls of Congress. Instead we have a criminal syndicate sitting around scratching each other backs while they count their cash. The division between the political parties has become almost nonexistent as they work together in a self-serving, mutual admiration society.

Voters must rid the halls of Congress of incumbents and mandate limit terms for every political office. They only thing our Congressmen and women learn through experience in the Beltway is that crime pays them handsomely.
Posted by Paul Huebl Crimefile News at 11/02/2010 08:13:00 AM

Vote all of the useless incumbents out! If nothing else, this will send a clear message that we are aware of their criminal activities and will not stand for it anymore. Now excuse me while I leave for my local polling place to vote straight Republican.