The Origin of Warrantless Government Searching of Americans 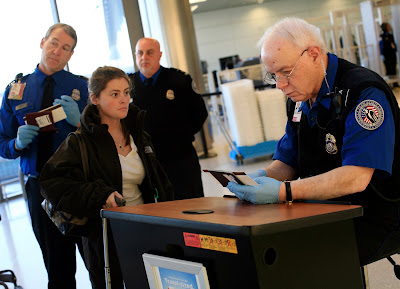 Chicago, IL—I saw this coming long ago and predicted the future death of the Fourth Amendment to our Constitution. In case you never read it or have forgotten what it says, “The right of the people to be secure in their persons, houses, papers, and effects, against unreasonable searches and seizures, shall not be violated, and no Warrants shall issue, but upon probable cause, supported by Oath or affirmation, and particularly describing the place to be searched, and the persons or things to be seized.”

All agents of the government were required to keep their paws and noses out of our bodies, homes and belongings unless there was probable cause of criminal activity and a warrant. The courts would later dilute the warrant requirement if exigent circumstances suggested that involved officer safety or to prevent the destruction of evidence.

Violence happens everywhere in the world and the days when they adopted the Fourth Amendment were no exception. Back then freedom and liberty was not bartered for promised security like today.

For me side-stepping the Bill of Rights to search Americans began right after a violent and dangerous criminal, Eugene “Iceman” Lewis’ attempted his escape from a 7th floor judge’s chambers at 2600 S. California Ave in 1971.

Lewis, a well know militant Black thug was already under one well-deserved death sentence and was about to receive another for the cold-blooded killing of a Thillen’s Security guard servicing the Sebring Jukebox Company’s payroll more than a year earlier.

Lewis took a bailiff and assistant state’s attorney hostage with a gun provided by a court clerk who was enamored with the killer. She placed the gun in a hollowed out book for Lewis. Lewis was kept in the chambers handcuffed under guard by an armed bailiff. Concealed inside Lewis’ mouth was a homemade handcuff key from a ball point pen refill. He used the key to slip one wrist from the cuffs and dashed for the gun inside the book.

Lewis then disarmed the bailiff and with a revolver in each hand grabbed the hapless prosecutor and bailiff and began his walk to freedom.

An Area Four detective, Crosette Lee Hamilton heard the commotion and concealed himself behind the gray steel freight elevator outside door. He waited for the trio to pass and fired a single shot from a .38 Colt Detective Special into the back of Lewis’ head. Two uniformed officers assigned to the court from the Marquette District (010) opened fire on Lewis as he fell to the ground.

Lewis managed to wound the state’s attorney in the hand and another shot struck local lawyer, Leonard Karlin in the butt.

When we lifted Lewis’ body from the floor there was a flattened .38 standard 158 grain lead bullet on the floor, under his head. Hamilton’s bullet never even penetrated the killer’s head!

Within a few minutes of the shooting I personally saw, Black Panther, founder and now Congressman Bobby Rush was on the scene visibly angry and shaken up. To this day I believe that Rush was involved in the escape plot and was perhaps waiting in a car outside on California Ave. If Rush was an accomplice he still could be charged with felony murder of Lewis since there is no statute of limitations on that crime.

I attended the post mortem examination of Lewis and counted 22 holes from 18 gunshots. The Iceman would never hurt anyone again.

Within a day the presiding criminal judge, Joe power told me he was ordering big changes. Powers had ordered the Cook County Sheriff, Joseph I Woods to provide his police to search everyone entering the building. Power concluded that people entering the building, are doing it as a matter choice and that the search was then consensual. For the next month 35 guns per average day were taken from court visitors surprised by the search. Thousands of knives and an astronomical amount of narcotics were recovered. There were no prosecutions of these people most of which were already convicted felons. Instead we confiscated the contraband during a three-month grace period. After that arrests were made.

The Judge Power security plan spread like wildfire to courthouses all over the country. Next, cowardly government bureaucrats everywhere learned they could use the Judge Power program too.

The idea of these searches being consensual is pure hogwash because people are forced by law to do business with the government every day. People are ordered by jury summonses or are subpoenaed to courts and have no choice except to subject themselves to the frisking or be jailed. Others are ordered into buildings over tax matters, pensions, and permits.

As for flying on commercial aircraft there really is no other alternative for people required to fly for their jobs and families. The searches by the FAA and now TSA are simply unlawful. The courts have refused to do the right thing and outlaw the practice because they invented, promulgated and enforce this violation of American Civil Rights.

Most Americans never lived in a country where they could freely move about without being bullied, frisked, fondled and groped by government agents. The vile and un-American practice of warrantless searches has been accepted by the ignorant masses as a part of living under government.

That gun that started this whole outrage was brought into the building by a clerk of the court. It is the current routine to give all court employees the right to bypass the screening. They never fixed what was broken!

Acceptance of this tyranny does not make it right. We survived as a nation including our own Civil War for nearly 200 years without searching every American like a criminal.
Posted by Paul Huebl Crimefile News at 11/11/2010 03:51:00 PM

good article . I twittered it and facebooked it .

Great article! Not only about today's implications but an incident of history. I did a quick google search for Iceman Lewis to see if there were any other citations or versions of this incident, and came up with none. That's probably just as well, as far as I'm concerned. Another dirtbag who doesn't deserve that much attention himself, and stopped being significant thanks to quick thinking police officers.

So true Paul.. Because we do not act up like the street Savages, and are mostly like Sheeple, the government takes advantage of our pacifism, our little bit of bitching, in order to appease the Loud-Mouth Anti-American Crowd, who they are afraid to discipline for their constant misconduct. Instead our Constitutional Rights are ignored, and our beloved country slips further and further into the grasp of communism. Instead of actively going after the problem, they don't, do to their Political Correctness Socialist Tool, and therefore search little old ladies in their 70's at airports; etc. as they mostly won't complain, instead of cracking down on Muslim goings-on here in the U.S. True Americans must stand up NOW for ALL our Constitutional Rights, starting IMMEDIATELY, by letting all our newly Elected Politicians that we will NO LONGER stand for this Government Santioned Nationwide Violation of our constitutional Rights. This is OUR Country, NOT THEIRS. Our Politicians work for US, not vise-versa. The are to do what WE the PEOPLE want them to, not what they want to do. If not, continue to throw them out by the hundreds, just like in the November 2010 Elections, which should be only the Beginning of the Crackdown on useless, unAmerican U.S. Politicians. A good start is to continue to protest, and to vote EVERY Polkitician with a [D] infront of their name out, as well as any Republican [RINO] type. NoQuarter, Conservative USA Politicians only. No New World Order, [global socialism] no United Nations dictates. USA, and only USA first and foremost.
And, by the way, Hey Obama, Where's the Birth Certificate ? Hey newly Elected Politicians, Where's Obamas Proof of being a Natural Born U.S. Citizen ? We should all be watching, and holding the newly Elected accountable for answers as soon as they take over. No more games, no more Political charades.
The dogs of War don't negotiate, The dogs of War don't capitulate.