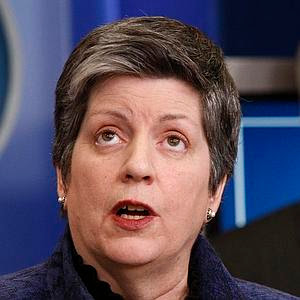 Washington, DC—Janet Napolitano, a lawyer was elevated to the position of U.S. Attorney for the District of Arizona by Bill Clinton for her party loyalty. After the Democrats were gone from the Whitehouse she lost her patronage job and got elected as Governor Arizona. Like most Leftist Democrats she spent much faster than the tax money came in.

Napolitano opted for photo radar highway enforcement as a way to fund out-of-control government. In the process the courts ignored hearsay prohibitions to get otherwise inadmissible evidence admitted. I guess when judge’s retirement are funded through traffic fines anything goes as people’s Due Process rights are violated.

Barack Obama appointed Napolitano as Homeland Security Secretary simply because she could be counted upon to obstruct justice when it came to immigration crimes enforcement and leave our borders vulnerable to crime and terrorist attack.

Rather than to shift focus of Airline security to people traveling on passports from countries we are at war with Napolitano dropped the hammer on American grandmothers and even pilots forcing them through special invasive X-Ray imagining machines exposing then to privacy invasion and unknown health risks.

There was a TSA related firearms accident caused by a booby-trap padlock holster required for airline flight deck officers. On Napolitano’s watch, an exhaustive investigation report and recommendation was made by the Inspector general’s office to scrap the dangerous padlock. Napolitano refused to follow the recommendation. I guess she will wait until someone is killed and their family collects millions from taxpayers.

Napolitano has left the borders unsecured and has placed American lives in unnecessary danger at a time when terrorists are constantly threatening to kill us.

Napolitano had no experience or training as a cop and has no qualifications to hold that position. Napolitano is aiding and abetting criminals and foreign terrorists by Obstruction of Justice. Janet Napolitano is dangerous for America.