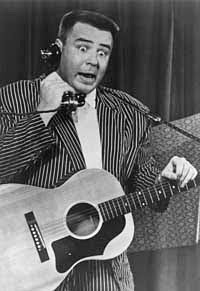 Los Angeles, CA— February 3, 1959 will always be known as the day the music died. Three talented young lads suddenly shot up to fame in 1958.

They were all beginning lives of fortune and fame as their music was being played all over the world. J. P. Richardson, also know at The Big Bopper, Buddy Holly and Ritchie Valens boarded a four seat plane for their next engagement in Minnesota.

There was a fourth lad I met many years later in Phoenix who was supposed to be on that plane. He was none other than the late great Waylon Jennings gave up his seat to Richardson who was suffering from the flu. Jennings was Buddy Holly’s bass player at the time. Holly's guitarist, Tommy Allsup, agreed to a coin toss with Richie Valens for the remaining seat. Valens won. Several miles from Clear Lake, Iowa the plane went down in a blizzard taking four souls including the 21 year-old pilot, Roger Peterson.

Richardson was a D.J., song writer and now a singer who’s somewhat silly but entertaining song Chantilly Lace was a big hit. Richardson acted out that song on stage by singing in to a telephone.

I just spotted Richardson’s girlfriend, Chantilly Lace time-traveling into the present, wearing a wild looking pair of leggings! She was actually on the cell phone with Richardson. Who else could it have been? I was lucky and caught her on video before she disappeared into the past for yet another date with the Big Bopper.

I have more respect for a tramp-slut Hooker than I do for a Politician...