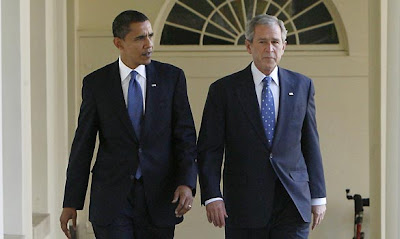 I can’t say that I like the idea of classified national security information being released to the entire world. However the conduct of our last two Presidential Administrations has become an international embarrassment.

Barrack Obama’s purely symbolic Gitmo closing campaign promise, resulted in millions of taxpayer’s dollars being used to bribe nations into accepting terrorists from our custody. It was even used in a pay to play scheme for diplomatic advantage. One thing for sure this is downright despicable.

There is plenty of blame to pass around to George Bush, but what Barack Obama has done in less than two years appears to be on its face impeachable.

One thing for sure Congressional investigations of Obama his Czars and choice of Secretary of State will take more time than Congress has.

I hope there is an impeachment and a lesson from the disclosures for all those entering the Whitehouse to not lie to the American people. Somehow I expect Congress will find enough federal felonies to put Bush and Obama away for life.

Maybe we can find an honest Conservative for the Office of President for a change.
Posted by Paul Huebl Crimefile News at 11/28/2010 05:37:00 PM