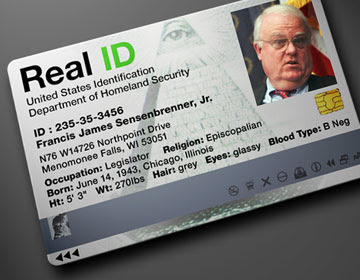 Washington, DC—It’s a plan that has the full support of confused, so-called Conservatives like Fox News commentator Bill O'Reilly. The concept is to have a government issued, tamper-proof, picture ID card for every man, woman and child in America.

On its face it sounds like a great way to control immigration, entitlement and voter fraud. It will do none of those things.

The government has redundantly thrown every obstacle possible in the way of immigration enforcement for the lifetimes of most Americans. Police will never be allowed to demand that ID card as they can now do with a driver’s license of a person driving a car. There will never be an Identification card requirement for voters unless we repeal or re-write the Voting Rights Act.

The government will always exempt those people living on the margins of society and exemption from the ID card requirement as they have always done.

The national ID card in just another big government program that provides a false promise of safety and security, in exchange for your hard won liberty and privacy.

What will happen is there will be a grand single database for every responsible taxpaying American for government agents to use and abuse. It will keep track of everyone with current photographs along with the requirement of proof of their physical address. Everyone means only those willing to comply with the ID card requirement.

I see this as ominously as the tattoos the Nazi’s required of concentration camp inmates. The government implanted micro chip can’t be far behind.

Soon enough technology will provide a way to instantly read a person’s DNA code with a hand held device. We will have to deal with that horror when it comes along.

Americans are so willing to give up a slice of privacy, freedom and liberty every time their favorite politician suggests they do so. We seem to forget how wildly popular Adolph Hitler and National Socialism was in Europe until that bad Idea cost 50 million lives including nine million Germans.

There are those amazing people that always trust their government even when they are placed in lines for extermination.
Posted by Paul Huebl Crimefile News at 11/28/2010 07:50:00 AM

In the UK they just shut down the database they were creating for exactly this, and scrapped the whole idea of ID cards.

If the UK, which leads the world in deployment of surveillance technology, whose government has handed effective control of the country to unelected bureaucrats in Brussels, whose corrupt and incompetent members of Parliament make the likes of Charlie Rangel and Nancy Pelosi look like Winston Churchill, and most of whose population are so dumbed down by 60 years of the welfare state, said "no" to a national ID card, surely to God here in the USA we can too?

I've drawn a couple of personal lines in the sand: I will not go through a body scanner, nor will I give DNA for a drivers license. It's easy for me to boycott flying, but if ever (when) the DMV wants me to submit DNA it is then I will become an outlaw. I've discussed this with the family - going to jail for no drivers license - and they are fully understanding.

I have zero interest in a national ID card and will ignore it at the risk of being shut out of services. If it becomes too onerous then I'll move overseas.

"won't go through the scanner, won't give DNA" Oh yes you will. When the police say "We have your children" you will do whatever they tell you to do. They asked German Jews: "Why did you get on the bus?" and the answer, "Because the police told us to." So you see, it is not what "you" will or won't do. It is what "the police" and the military "will or won't do" that is important.

When someone, including a police officer, threatens your children you shoot them.

Just take everybody in DC, put them in a space capsule, and shoot them into the heart of the Sun.

And afterward, don't get between me and any place selling champagne, unless you want to get run over.

Not all Jews went along with the Nazis folks.
Some of us went Partisan.
And you know what?
We could all learn a thing or two from the history of Jewish Partisan Resistance to the Nazis.
Unless were ready to click our heels like that pinhead Bill O'Reilly.