What to Do with Those Unwanted TSA, Naked X-Ray machines 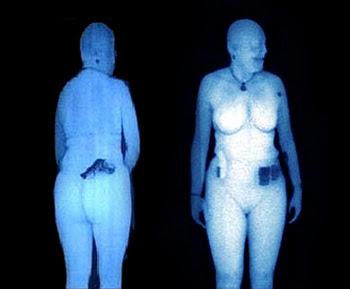 Washington, DC—The politicians in our Congress never met a government Contractor whose products they did not love. It’s the contractor's contributions of course, that keep them in the Congressional gravy train for life.

Our government bought loads of these horrifically expensive, back-scatter X-Ray machines to use in the War against American Airplane Passengers. Oddly enough when Homeland Security Director Janet Napolitano unveiled the machines for the media she declined an opportunity to personally demonstrate how they would be used.

These machines need not hit the landfill. Instead they can be rerouted where they belong in the hundreds of prisons in America to be used on criminals.

I think that the special wing of Club Fed used to house corrupt politicians, government officials and lobbyists should get them as soon as possible.
Posted by Paul Huebl Crimefile News at 11/15/2010 01:21:00 PM

Damn! That's a big girl there in that pic.