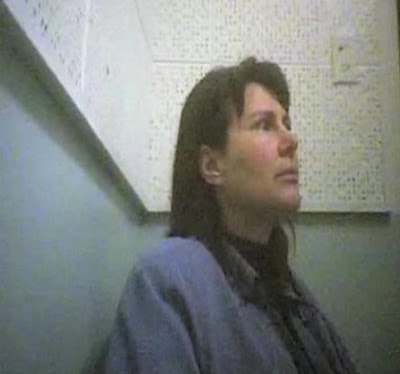 Los Angeles, CA— LAPD art theft detective Stephanie Lazarus has been held in jail since her arrest in June of 2009 in lieu of a $10 Million bail bond requirement. Lazarus was arrested for the murder of Van Nuys, 29 year-old nurse, Sherri Rae Rasmussen nearly a quarter century ago in 1986. Lazarus’ future looks very bleak unless the state’s DNA evidence can be discredited or otherwise somehow eliminated.

I always tell anyone and everyone I can about our birthright as Americans to remain silent and to never talk to police when they come with questions. It never ceases to amaze me how cops themselves of all people insist on having unnecessary conversations with fellow investigators targeting them.

If we allowed everyone convicted at trials for crimes to take back the words either told to police or credited by police as having been said by the defendants, our prisons would all be empty. Heck, every cop knows that!

Despite explicit Miranda warnings people insist on being chatty with the very people who are trying to jail them. Of course, the non-custodial conversations with police don’t require Miranda warnings so anything at all you say will be put before a jury should you be charged with a crime. The solution is simple golden silence. Silence may protect the guilty but more importantly it protects the innocent.

In my experience it’s the cops themselves that don’t seem to have learned anything at all from being a cop. When a fellow cop asks the simplest of questions about anything at all survival radar should kick in and the conversation should end. Cops just like every suspect blab away with denials, supposed alibis and small talk.

With Lazarus there is a huge problem that maybe impossible to get around, reported DNA evidence from a human bite left on the victim’s arm.

I see a real defense of justifiable or accidental shooting during a deadly fight between these two women involved in a love trangle. Those defenses are all but foreclosed since Lazarus freely told detectives that she was not involved in a physical fight with the dead victim.

Lazarus can try to offer that scenario at trial but to do so she’d have to admit she lied to investigators. It’s highly doubtful any jury would lend credibility to any suspect under those circumstances.

In my experience innocent people freely lie to police in effort to remove themselves from any involvement with any part of anything under police investigation. When this happens there is little defense lawyers can do but watch their client’s lives slip away.

Defense attorney, Mark Overland certainly has his hands full with his chatty client. There are the early statements memorialized in police reports and now the video from one the old Parker Center interrogation confessionals with the picturesque acoustic fiberglass wall and ceiling panels.

Lazarus actually tells the dicks with a smile during her questioning, “I know how this stuff works.” That remark will really go over big with any jury along with a little wisecrack, “Am I on Candid Camera?”

A few casual seeming sentences are now going to set the stage for whatever this accused woman has in store for the rest of her life. It is not a pretty picture

Let me say it again. When the police come calling simply tell them, I will cooperate with you in every way, but first I want a lawyer. No jury can be told that you asked for a lawyer and refused to talk. Please try and picture how my advice would look on a cell-phone text message to would read, “STFU.”

Watch lots of video of Stephanie Lazarus’ from the Parker Center Confessional right here.
Posted by Paul Huebl Crimefile News at 11/24/2010 02:31:00 AM

The police are not your friends.

I'd always assumed that anything you said until you had been Mirandized could not be used against you. Is that not true?


So if a cop comes to your door asking for instance, did you witness an assault in the street outside, you are actually taking a big risk saying anything even in this circumstance?

That's a common misconception. The four words to live by are, "I want a lawyer."

Having zero contact with police improves your chance of avoinding misunderstandings that can cost your freedom or life.

Avoid calling 911 for any reason other than fire or a medical emergency.

Paul,
I get the strong impression you think Lazarus may be innocent of murder despite the DNA evidence. I have to remember what you wrote in the past about these crimes and trials.

You have rightly said that a jury was not present and cannot really reconstruct the event. They can only guess based on what they are told and shown. That is never enough. Even with witnesses we know people lie.

Stephanie probably lied but does that make her guilty of murder? On
it’s face this case screams Manslaughter rather than murder because of the knock, down scratching and biting.

Pre-meditation would simply been a shooting.
Yes it could have been justifiable with the size difference between the two women.

I don’t want to see anyone get away with Murder but convicting the innocent is far worse. Innocent people do lie far more often that they should.

I think this will be another case where the jury guesses itself into a Guilty verdict. Perhaps the lawyer is good and has a great investigator like you. Then she will have a chance to get her life back.

I think her police career is over if she lied to fellow officers. I think she’d be grateful to see her freedom.

No reports on this trial here? Been following it snce it began and totally intrigued by it.

Remember that woman in Houston, Texas that ran over her husband? When he lay dying, she did a victory lap. Her bond was $30,000, which she could afford.

Totally forgot about your blog, haven't been in years.