The True Goal of the TSA under Obama’s Control 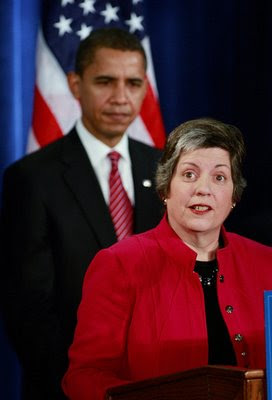 Washington, DC—It’s no secret that the Obama Administration took a crippling beating in the Midterm Elections. The power to continue in their destruction of our economy and system of government by the Whitehouse has ended at least in the halls of our Congress.

The Executive Branch of government is still firmly under Obama’s thumb. Obama and his Czars control every move of the TSA. The bailouts aren’t over by a long shot and the TSA is the primary agent of this latest effort.

The TSA suddenly claims a need to grope, fondle and inspect the genitals and breasts of American travelers. The tools the TSA is using to allow this are fear mongering and intimidation. The TSA suggests there is no other way to “protect” American travelers.

The TSA is engaged in the bankrupting the airlines by making travelers so uncomfortable that they won’t fly. In order to keep this vital industry afloat Obama's government will step in and nationalize another industry and significant portion of the America Economy.

The perfect timing to roll out this plan was after the Socialist majority was defeated in Congress. The executive branch would not miss a stroke of its conversion to that failed Marxist model.

The world wide tourism and hospitality industries will of course suffer massive collateral damage as a result. This of course will make millions more unemployed workers destined to become entitlement addicted Socialists.

If our President and his TSA were really concerned about airline security and the protection of Americans they’d simply order all felons convicted of violent crimes and those people flying on passports from countries unfriendly to the United States off our planes. Our prisons have become fertile recruiting grounds for Muslim terrorist organizations.

They don’t want security, they only want Socialism. Barack Obama and his political party loyalists at Homeland Security are far more dangerous to America that the Taliban or al Qaeda. Obama must be stopped.
Posted by Paul Huebl Crimefile News at 11/13/2010 08:58:00 AM

Just put a towel on your head. They wont bother you then

Interesting article. The nationalization (or equivalent) of the airlines may just be moving up to the front burner. The whole thing is playing out like a cheesey "B" movie political thriller, yet this is as good an explanation as any.

Obama came in with the slogans of "hope" and "change" and the belief among a lot of people that with a black man in the White House, civil rights be assured. Well, we can see where we are with all that a mere two years later.

Of course, it is not enough to blame Obama. There are plenty of other people out there responsible for the destruction of our liberties.

The body scanner and full body patdown is an unreasonable search without probable cause or warrant, and therefore violates the Fourth Amendment of the constitution. And no, despite what some TSA thug said, you do not waive your constitutional rights when you buy an airline ticket.

The only way we lose our constitutional rights is when we accept violations such as this without protest.