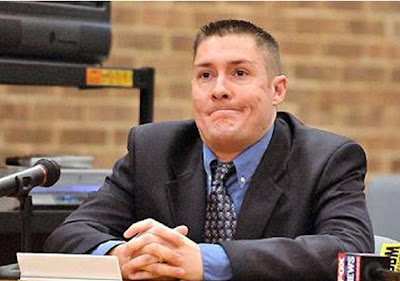 Oakbrook, IL—On 30 November at 19:00 HRS the Police And Fire Commission meets at the Village Hall to hear allegations against Officer Stephen Peterson. Stephen Peterson is the son of Drew Peterson, the retired Bolingbrook, IL police sergeant who stands accused of killing his third wife.

It is undisputed that just prior to his arrest, Drew Peterson asked his son Stephen to hold his favorite guns for safekeeping. They were delivered in gun cases that remained unopened by the elder Peterson.

Soon the elder Peterson was arrested and Illinois State Police demanded to know where his guns were. The elder Peterson informed them they were at his son’s home. Investigators went to the younger Peterson who voluntarily handed over the cased guns. Included was that short barreled rifle that was later the subject of a failed prosecution against the elder Peterson on a very technical legal question.

Apparently there exists no evidence that the younger Peterson ever opened the cases or examined the contents. The younger Peterson had no reason to handle those items. There is also no evidence that the guns were ever hidden or made unavailable to investigators. Last but not least, there is no allegation or even a suggestion that the guns were ever involved in any crime by anyone.

This police commission matter is more about punishing Drew Peterson through his son who is the primary caretaker of his tender aged siblings. I guess if the Illinois State Police torture the kid enough they somehow think he can or will help the Will County States’ Attorney convict his father. The problem here is that Stephen Peterson is convinced that his father is an honorable man and not the killer gossip mongers have claimed.

This action against Stephen Peterson is a Witch Hunt that shows the ugly side of government. I would suggest that any police officers with the time should show up at that Tuesday night Oakbrook hearing in support of a decent young cop.

Let’s hope that the Village of Oakbrook can be unemotional and fair as these facts unfold before them.

So he held the guns of his father who could not hold them. So what? He gave them up to investigators when asked for them, again, so what?

What crime or administrative rule was broken?