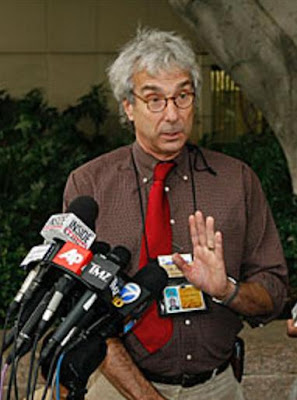 Los Angeles, CA—He was a Public Information Officer (PIO) for the Los Angeles County Superior Court. It was a well paying job with great benefits. His job was to provide public information to the masses through the media. This sounds simple enough until the public records being revealed have a certain odor to them.

His name is Allan Parachini and he came from the ranks of working reporters at the L.A. Times to be named as PIO for the court. He was hired to do a sort of tap dance between judges and administrators who often hate each other. They all demanded that Parachini be their personal cheerleader.

The most infamous PIO of all times was a real media genius we remember as Joseph Goebbels, who was the Minister of Enlightenment and Propaganda for the Third Reich. Goebbels kept the secrets and fed the world’s news media a steady diet of disinformation. Instead of serving the German people, he served and was a huge part of a criminal regime.

When it comes to American court records, and the operation of the related bureaucracy there is no room for secrecy. We are not supposed to have secret, Star Chamber style proceedings and hidden contracts in any American Court. The only small exception is over sealed records involving juvenile and mental health related court proceedings.

Then there are judges that order the PIOs to make it difficult or impossible for reporters to get their electronic news-gathering equipment near prosecution witnesses. Prosecutors know their witnesses love the media limelight and will derail prosecutions with their inconsistent statements. Some judges will do everything and anything prosecutors ask.

For Parachini, figuring out just who his boss is, is not an easy task. Ultimately Parachini’s real master is the public, or least it should be that way.

Parachini’s duty was to field questions from reporters, producers and those bloggers like me and of course TMZ.com. Again there are no secrets in the courts business affairs but they fired Parachini claiming he passed on secrets to TMZ for pay.

If they had any evidence of bribery, Parachini would be criminally prosecuted. They can prove Parachini talked with TMZ’s people, but of course that’s precisely why he was hired. They unceremoniously disgraced and put Parachini out on the street.

Parachini has offered a more understandable reason for his firing and that was because he sought to release certain public spending and contract records tainted by an ugly odor. That was an unforgivable sin unless you take the position that the Public Information Officer works for the public.

Now, Parachini will have to seek protection for his rights in some courtroom. I see a problem in that those judging the merits of Parachini’s claim will all be part of the same judicial fraternity that put Parachini on the street.

For Allan Parachini I have a saying that I live by, “If justice ever happens it’s usually by accident and for all the wrong reasons.”