Judge Fidler’s “Wall Of Injustice” In The Phil Spector Case. 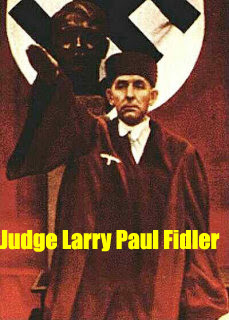 The jury in the Phil Spector murder trial deliberated for a week and they were deadlocked. The jury sent out the note and Judge Fidler polled them on the question of whether further instruction would help. Three jurors volunteered that it might help. But help change whose mind was my question? I suspect that those jurors wanted the other side of their battlefield instructed instead of their own.

Judge Fidler took the unusual step to remove an approved jury instruction that was somehow preventing the conviction of Phil Spector and replaced that with two new and convoluted instructions that beg the jury for anything but an acquittal.

To date, Judge Fiddler spent many months scheming to find ways to get a jury to convict Phil Spector. Judge Larry Paul Fiddler has been biased, abusive and feeding his own agendas. The ever-growing laundry list of judicial rulings are against fairness and any attempt for a neutral inquiry into the death of Lana Clarkson. Judge Fidler is more like a Mike Nifong in judicial robes.
Posted by Paul Huebl Crimefile News at 9/20/2007 05:53:00 PM

In addition THE JUDGE is refusing to add the defense scenarios to the jury instructions - such as that Lana may have been playing with the gun (as she was gun savvy) and the gun went off accidentally when she was fooling around etc. Or she was accident prone and depressed.

So only the Prosection’s side of events are going into the jury instructions after the original hung jury 7/5.

And to the level of professionalism? -


I would think that the Judge should get the jury instructions right the first time -or get off the pot.

The Jury have had enough after 5 months.

They are not getting paid for this
However the lawyers and the judge are!

But it seems the Judge won't let the Jurors go home until they convict Spector.

Lets hope the jury are strong enough to retain their independent thought.

I agree strongly with the above post. It is so apparent that Fiddler is bias. And, it is a shame to see our justice system work in this manner. What he has done is the same as jury tampering.

Judge Fidler has overstepped his bounds to accomplish his goal of being THE California judge who can get a celebrity conviction.

Judge Fidler put the jury under scrutiny for all the world to hear and if that's not coercion, what is?

This clown has his own agenda all right. He is in love with being the Court TV ringmaster. He wants to be known as the only judge to put away an accused Hollywood celebrity. He assumes that the majority of TV viewers hate Phil Spector so as long as he stays on the prosecution side, he’d be loved by millions. Larry Paul Fidler may fall far from grace before the last page of his Spector story is written.

RE: JUDGE FIDLER'S UNPRECEDENTED AND HIGHLY PREJUDICIAL JURY INSTRUCTIONS GIVEN TO THE JURY AFTER THE JURY HAD BEEN HUNG AND WHAT THE EXPERTS THINK

from Linda Deutsch and Associated press on 21st Sept 2007

LOS ANGELES (AP) — Jurors in Phil Spector's murder trial resumed deliberations after a two-day break with a new set of instructions from the judge that legal experts deemed an unprecedented effort to break a deadlock.

Outside the jury's presence, defense attorneys on Thursday fought vigorously against the instructions, which inject new scenarios of how Spector might have killed actress Lana Clarkson.

They complained that Superior Court Judge Larry Paul Fidler was presenting the jurors with new theories after they had already deliberated for days. And they said he was turning the defense's own evidence against Spector.

The jury, which got the case Sept. 10, resumed talks briefly Thursday and returned to deliberations Friday.

Among the scenarios offered by the judge was that Spector forced Clarkson to put a gun in her own mouth and it went off.

The focus of the defense's scientific evidence in the five-month trial was aimed at proving that the 40-year-old Clarkson had probably pulled the trigger herself, either by accident or in a suicide.

Spector, 67, is charged with killing Clarkson in the foyer of his Alhambra mansion on Feb. 3, 2003, a few hours after she met him at her job as a nightclub hostess and went home with him.

Prosecutor Alan Jackson embraced the judge's move on grounds there was "a plethora of evidence" that would support the hypothetical scenarios even though Jackson had not advocated them during the trial.

In response to defense arguments that there was no evidence of such hypotheticals in the trial, Fidler said: "It's a reasonable inference that can be drawn."

Stan Goldman, a professor at Loyola Law School in Los Angeles who was in the courtroom Thursday, said that with the new instruction the judge has provided more reasons for a conviction.
"An acquittal would be an astonishing thing at this point," he said.

However, Goldman and other experts said jurors may continue to cling to their positions and maintain their 7-5 deadlock.

Fidler told the panel that to prove Spector guilty, "the people must prove that ...

the defendant committed an act with a firearm that caused the death of Lana Clarkson, such as placing a gun in her mouth or forcing her to place the gun in her mouth at which time it discharged,

pointing the gun at or against her head at which time it entered her mouth and discharged,

pointing the gun at her to prevent her from leaving the house, causing a struggle which resulted in the gun entering her mouth and discharging."

Fidler then added a caution.
"By using these examples I am not suggesting that any of these acts took place. These are inferences you may draw from the evidences but are not required to do so. You may reject them. These are only possibilities that you may consider," the judge said.

Attorney Thomas Mesereau Jr., who represented Michael Jackson in a high profile trial, said he was shocked when he heard of Fidler's action.

"It is unprecedented and highly prejudicial to the defense," he said.

Loyola Law School Professor Laurie Levenson, a former federal prosecutor, called the judge's instruction "unorthodox to put it mildly.""If it does result in a conviction, you have a significant issue on appeal," she said. "I don't think the court of appeal has ever heard of anything like this."..."

Are the jury going to hang out for another day or so next week so as to do the right thing by the Judge respecting all the time the Judge, Jury, lawyers and families have put into this Prosecution and defense i.e. 5 months or more?

If Judge Larry Fidler's instructions had clarified everything wouldn't the light bulb have gone on with a verdict by now?

Possibly there is still the same disagreement regardless of the new jury instructions, and the jurors are holding on to their own respective and individual points of view.

IS THIS A HUNG JURY?

YOU WILL FIND OUT NEXT WEEK IN JUDGE LARRY FIDLER'S COURTROOM!

I am convinced that Spector killed the girl. So what? The government has to play fair and square proving their case along the way and that's not been happening.

O.J Simpson walked because a cop lied under oath and the case lost its credibility.

Phil Spector my walk because of prosecution or judicial misconduct. Wedon't need to bend the rules just to get a conviction.

How about we all play fair and perhaps the guilty may get what they deserve?

The judge's new instruction with scenerios is absolutely WRONG. Here's why: A) there were no signs of a struggle; B) there was no evidence that the gun was forced into her mouth; C) there was no evidence that the gun was placed against her head and it somehow slipped insided her mouth. There would have been bruising on her face; D) based on the evidence, even the experts for the prosecution could not place the gun in Phillip Spector's hands. So where with judge comes up with these scenerios is beyond me. One of the defense lawyers' had it right when he said in so many words that the judge had his thumb on the scale of justice. This case is not just about Phillip Spector, it's about all of us. His rights are our rights. Unfortunately our rights are slowly being chipped away.

The attorney Bradley Brunon actually said that Judge Larry Fidler had his thumb on the scales of justice and he said it to the Judge's face.

What a brave man attorney Bradley Brunon - one of the attorneys representing Phil Spector.

Brunon got shot down immediately of course -because Judge Larry Fidler is only an insecure human being who ranted and raved at attorney Bradley Brunon and Brunon had to retract his heart felt statement quickly, but nevertheless he let the cat out of the bag.

In addition I am not quite sure why the Prosecution, the jury and others who are looking on - would want to convict someone based on the testimony of the Prosecution's star witness who is not independent of the State as he is facing deportation and has a couple of things to gain in testifying the way he did - like not being a murder suspect himself, and for his good deed to the State - getting his working papers and a green card.

I agree with Aloaha57 "This case is not just about Phillip Spector, it's about all of us. His rights are our rights. Unfortunately our rights are slowly being chipped away."

and thus Brunon did say it all when he said to Judge Larry Fidler's face that he was pressing his thumb on the scales of justice.

This is one reason why you have the right as a juror to exercise nullification.