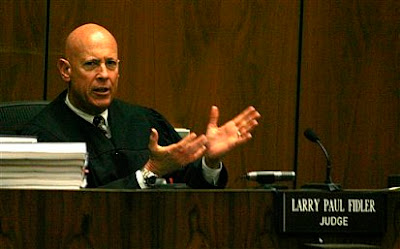 Los Angeles County Sheriff's officers have launched an investigation into a MY SPACE posting under Phil Spector's young wife's name today. That posting has since vanished from the site.

It’s no secret that I’m no fan of Judge Larry Paul Fiddler’s handling of Phil Spector’s murder trial. The judge has consistently ruled to make conviction a sure thing. He’s allowed the prosecution unusually wide leeway of what they could use against Spector. I hate Fidler’s actions because they threaten every American’s rights.

I met the judge nearly five years ago when he and that attractive Court TV reporter/lawyer, Beth Karas gave a seminar that I attended at the Investigative Reporters and Editor’s conference in San Francisco. Judge Fidler was as nice a fellow as I’ve ever met. Fidler struck me as knowledgeable, glib, articulate, and a fun kind of guy. Fidler seemed very fond of news reporters.

When Phil Spector was indicted I came to the courtroom and saw a not so small but opinionated army of reporters and Phil Spector book authors. Some went out of their way to share sordid stories and gossip about Phil Spector along with their theories of his absolute guilt. This seemed like an open and shut case to me but that changed, as the government’s case just did not add up to me.

I know that many of these reporters and authors had conversations with Judge Fidler who quickly learned what the popular media accepted conclusions were of Phil Spector’s guilt.

I’m not sure what influenced Judge Fidler to so aggressively attach himself to the prosecution side of this case. Fidler’s not wavered in his slant and effort to destroy Phil Spector’s life. Judge Fidler's actions did not fail to anger lawyers, friends and family members.

Nobody has the right to threaten anyone including a rogue judge. There are however thinly veiled threats that powerless people make against others. “If, you weren’t an old man, I’d knock you down” is one that comes to mind. Wishing or suggesting someone deserves to die or should die may be really ugly but is protected speech under the First Amendment.

Did Rachelle Spector threaten Judge Fidler on a My Space page? Do the words, “The evil judge should die!” constitute a threat? I notice that no judge was identified or singled out by name. Just who is the “evil judge”? If that statement qualified as a threat against Judge Fidler then the author of the threat has to be determined and that may not be so simple. Occasionally judges are murdered in America and some people don’t need much of a reason to kill others. Accordingly it’s the sworn duty of the L.A. Sheriff’s officers to error on the side of caution to keep our judges safe.

One thing for sure no matter what side of the Phil Spector case you’re on, emotions are running very high and some people are saying things they should not be saying. I’d like to think that all Americans would want a valid and just end to the trial of Phil Spector rather than a verdict based on hate and vague theories.
Posted by Paul Huebl Crimefile News at 9/25/2007 12:35:00 PM