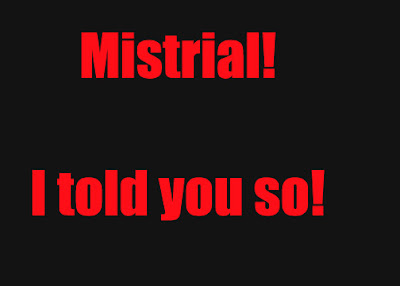 The vote was 10-2 in favor of a murder conviction against the legendary record producer Phil Spector. Judge Fidler did all that he could to unfairly lead the jury to a conviction. Under these circumstances the mistrial is a huge defense victory.

Further court action including dealing with the L.A. District Attorney’s announced decision to try this case again has taken place. The involved lawyers will get whatever feedback the jury will give them and use it to formulate their game plans. The lawyers will be back in court next Wednesday for further proceedings. Judge Fidler had what could only be described as a sour grapes facial expression as he announced the mistrial. Prosecutor Alan Jackson has tears in his eyes.

I suspect that prosecutors will have an even more difficult time with their witnesses as they forget the lies they told during the first trial. Of course the parade of bimbos from the ranks of Spector’s old bedmates may well be reluctant to face cross-examination again. I know the defense has some new questions for these ladies based on brand new information.

The good news here is the conviction train has come to a halt at least for now. It’s time for Judge Fidler to recuse from this case. I hope the next jury is sequestered by a new judge and there is at least an attempt at fairness.
Posted by Paul Huebl Crimefile News at 9/26/2007 02:52:00 PM

Isn't interesting that we all heard the judge tell the jurors that they can NOT talk to anyone or the press about his case. But when after all 3 defense attorneys corrected him. He stated I "could have misspoken." He then told the jurors, you CAN speak to anyone. Another 'whoops, or another 'lie'?

CONGRATULATIONS PHILLIP SPECTOR!!! :))) What a wonderful victory not only for your rights, but our rights as well.

Thank God there were some jurors on that jury with brains who worked really hard and who stood by their convictions of reasonable doubt.

In addition a couple of things that bothered the jury were:
1. No psychological profile of Lana offered by the prosecution!
2. Adriano DeSouza's lack of confidence on the witness stand as to what Adriano thought he heard.

The jury certainly did not waste their time even if the jury was hung.

You were right when you said that the jurors were on the internet. You should check out http://sprocket-trials.blogspot.com, not for the slimy content on Rachelle, but for proof of juror misconduct. One of the guilty voters was well aware of this blog and immediately after the mistrial, contacted this blogger. What this says about anyones, not only spector's, right to a fair trial frightens me.

Ten idiots voted for guilt based on this crap pile of 'evidence'? Doesn't this prove that the quality of jurors is abysmal now they are chosen from the vehicle drivers list and not the voters list?