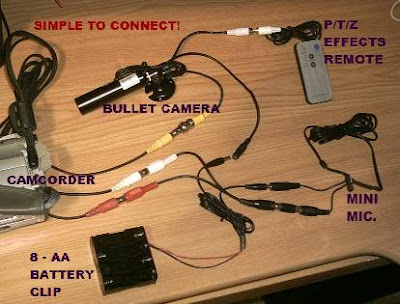 ST. GEORGE, MO--.This camera was set up by Brett Darrow, 20 who is a lad that’s been on the wrong side of run ins with local cops. It’s not the video but the audio that reveals an unfortunate verbal exchange between Darrow and Sergeant James Kuehnlein during a vehicle stop. The captured audio speaks for itself.

Had this been California and a citizen surreptitiously recordrd the audio of anyone the citizen’s car would get confiscated, held as evidence and the owner would face a serious felony charge. The illegal recording would never see the light of day in any legal proceeding against the officer!

Ever since Rodney King cops everywhere have been on notice that their bad behavior may well be memorialized for a hot television broadcast. Video cameras save many more cops every year from malicious liars that make false accusations against police.

This video with audio may well end Sergeant Kuehnlein’s career.

He must of had a bad day ! No excuse for what he did. He deserves everything he gets. I'll bet that's going to be a new career in something other then law enforcement. He should learn how to talk to people. What a putz !
Good luck Sgt. (NOT)

Sounds like the cop was having a real bad day before the t-stop. Nevertheless, if the police can do covert audio, then the public should be able to as well (check the laws in your state. Or change them.) Good for this young man.

1. We have no information as to Driver and the Officer's past experiances, or arrests; but lets say there is none.
2. We have no video or audio evidence from the Sgt's. car. Lets say there isn't any.
3. Lets list all the violations this Sgt. is alreay guilty of:
A. Being angry.
B. Yelling.
C. Threatening extensive driving violations, and arresting him for those violations.
D. Yelling again.
E. Getting angry and yelling some more.

O.K., with out all the evidence in YOU ALL have already made a judgement.
The Sgt. IS guilty of being verbally abusive, I'll give that; Even without ALL of the facts being in, but to be fired for yelling, and being angry at someone. Thats rediculous!
Suspended, sure... He deserves that, but fired, come on....

Last question for this brain trust; Why again did this kid set up a video camera system in his car?

I made no judgments about the sergeant’s actions here. However his own department did by suspending him. We will let due process take its course here.

There was a failure of the sergeant to handle himself as though he is always on tape. Had that been the case we would have never heard about this incident.

I agree with what "Anonymous said." That he shouldn't be fired (by the way, who is this 'anonymous said' guy or gal? Paul I sure wish you didn't allow 'anonymous' posts. They'd have more validity. )

Clearly the cop was 'crabby.' But where he crossed the line of just being crabby, was threatening to refuse him of his constitutional rights ect. The point I drive home, is good for the calm cool and collected young man that taped it. Below is a channel 4 news documentary on myself, when I was one of the first to do the LAPD Doc-U-Cam pilot program. I loved being protected by audio and video tape, because it allowed me to be more confident as I did 'pro-active' police work (thing of the past?) I could even push the envelope without actually crossing that very thin blue line. Not once did a citizen accused me of saying something inappropriate. The only one that ever did, was a fellow police officer who had an agenda.

Apparently the cop had more than a bad day, and as for having neither evidence nor cop-car video:

From the St Louis Post-Dispatch:

A check of court records shows Kuehnlein himself pleaded guilty of assault and stealing in two different cases, in 1988 and 1990. He successfully petitioned a judge in St. Louis County in 1998 to expunge his criminal record, which was making it hard for him to get work as a cop. The judge ordered those records sealed, as well as records of an acquittal for drunken driving and an assault arrest that did not result in charges.

During the meeting Darrow asked to see the videotape from Kuehnlein's police car. But according to Uhrig, that footage, inexplicably, is nowhere to be found. "That's the million-dollar question," Uhrig said. "Our policy says any contact the officer has with the public has to be on tape."