Maywood, IL Armed Robber And Urban Terrorist Is To Be Honored As A Role Model 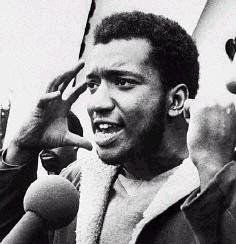 Insane you say? Yes it is insane! Black Panther Party Chairman and armed robber Fred Hampton will be honored in his hometown, Maywood, Illinois by brain-dead local officials with no less than a renamed street and statue. This kind of honor for the leader of a hate group will work well to always keep hate alive in Cook County.

I’d like to help the Maywood Art Committee with Chairman Hampton’s statue design. I’d re-create that wonderful scene where he robbed an ice cream vendor right there in his very own hometown. What a great example for all the children of Maywood!

It was a miserable time for law enforcement when the Black Panthers organized under one unified goal, killing cops. They put on a show for news cameras feeding an occasional breakfast to a black child. The ammunition budget was far more substantial then their free breakfast budget. That fact was well documented with scores of funerals for fallen cops ambushed and murdered by the cowardly Black Panther Party members. 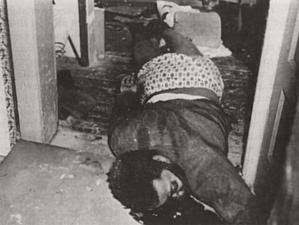 Fred Hampton lived by the gun and died by the gun one very cold Chicago December morning in 1969. Chicago cops assigned to the Cook County State’s Attorney’s Police raided a Westside flat. When the raid culminated Fred Hampton and another piece of human refuse, Mark Clark were displayed on the Cook County Coroner’s autopsy tables. At least these two terrorists would no longer be a threat to White people or cops.

That raid on the heavily armed Black Panthers was litigated for decades. Three-score and eight years later some Chicago history revisionists have rewritten that disgusting and violent chapter of history. They can rewrite history all they want but the descendants of many fine murdered cops will always know the truth.
Posted by Paul Huebl Crimefile News at 9/09/2007 07:45:00 AM

What about the cop that was killed in Maywood? Why not honor him?

fred hampton was a no good bum! he got what he gave. HATE..

The Black Panthers had" several slogans. One was " All power to the sniper " , another Panther favorite was " Death to all pigs ". They were terrorists, nothing more. They decleared war on the police and the police acted appropriately.
Maybe if their community honored people of peace, education and human decency they would achieve more then senseless violence. Violence that is perpetrated by their own, not white police officers.

The black community won't really be free until they stop honoring thugs and misfits. From the hip hop asshats who glorify drugs, violence and the dehumanizing of women, to this shit of honoring Hampton.....and unfortunately, it's all too real.

The cop in Maywood that was killed was white...so he gets NOTHING

I find this very heartbreaking as I wrote letters to every alderman in the City of Chicago last year to stop Chicago from naming an honorary street after him. When I checked into an honorary street for my son, a Chicago Police Officer killed in the line of duty, I was told that the City doesn't do it anymore. Guess I just didn't have enough political power and I don't live in the City to vote. Giving up my son was evidently not enough. To the City Fathers of Maywood, shame on you for glorifying such a piece of trash. And to the Maywood Officer Thomas Wood family, there are many of us out here that have not forgotten him and know the struggle you live with every day.

I am not a proponent of violence in anyway, and I know this comment is several years late...I just happened upon this post.
I do not agree with honoring people for terrorist acts of violence. But I find it interesting that the people who were responsible for the oppression of a race of people now have the answer to their "freedom." There would never have been a Black Panther Party, a NAACP, or any other "Negro" organization, had there not been an oppression of its people.
White people terrorized black people for years, and honored the perpetrators by never prosecuting the crimes, or by sitting on juries and finding them "not guilty."
In closing, you will have more success by solving the problem, not treating the symptoms.

The Panthers would have been off demanding education and striving for excellence. Their war against white people was counterproductive. The violence was directed at white people that are at best decedents of evil doers.

Remember it was Blacks that hunted, captured and sold slaves to Whites. We need to put the evil behind us and move forward to peace and prosperity.