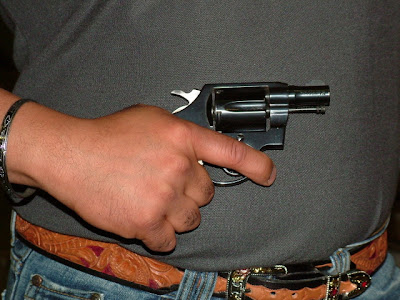 Yes there are a couple of things the defense team should have expounded upon. One was the fact that Spector called out to the limo driver for assistance, telling him to call for help. There is no other logical reason that Phil Spector did not call but for the fact he assumed the limo driver made a 911 call as he was asked.

The other was the limo driver’s X-Ray vision that allowed him to describe the brown wooden grips on the very small gun he claimed was in Spector’s hand. As you can see in the picture of A Colt Cobra in a small man's hand above that was impossible.

Another too late idea of mine was to have each member of the jury make a field trip to a police gun range and fire an identical Colt Cobra with .38 Special, +P ammunition. Since the Cobra is made of a light weight alloy metal instead of regular steel, the Cobra’s recoil is significantly more violent than the Colt Cobra’s all-steel twin, the Colt Detective Special. Watching the defense video of such a gun being fired was just not sufficient for the jury to experience.

Each juror would have all doubt erased about how Clarkson’s artificial front teeth were blown out by the explosion. The jury would also know that such an inter-oral explosion would spray the shooter with blood tissue and gun shot residue. The lawyers just did not know enough about guns to see the value of this exercise. I think that the prospective jurors would have had to be told of such a requirement before they were placed on the panel.
Posted by Paul Huebl Crimefile News at 9/17/2007 08:31:00 PM

Who knows what Spector told the driver that morning? The driver said he wasn't sure what Spector said before he had this magical epiphany.

That is a good point.

If I had been Phil Spector, I would have said the chauffeur misunderstood what I said... a long time ago. Like "They'll think I killed somebody."

Bottom line. Phil is not Ken, and Lana is not Barbie. Phil was not obligated to call 911 to report an urgent medical need. She was a stiff already. 30 seconds tops.

averageJoe
Congrats on a good site.