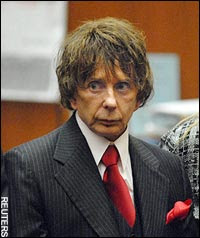 It was too long, too contentions and too sordid. The prosecution was fueled by tabloid gossip, demonization and raw emotion. The defense was simple enough as nearly a total reliance on today’s criminalistics.

The trial included the prosecution's canonization of a drug addicted, alcoholic, depressed, destitute and failed actress. Lana Clarkson was also a woman who was driven to swindle her friends into funding her questionable video project through a series of forged letters from various studio executives. In the end we also learned that Clarkson engaged in sex with Phil Spector after knowing him no longer than the time it took to be driven to his home. Was that an act of love or simple commerce?

Closing arguments ended this trial in Judge Larry Paul Fidler’s court today. This was a railroad job instead of a fair trial as the judge let prosecutors round up Phil Spector’s old bedmates from decades gone by that were unable to marry or otherwise tame the legendary record producer. Through their testimony these women demonstrated one thing for sure, that Spector was often guilty of poor taste in his sexual conquests. 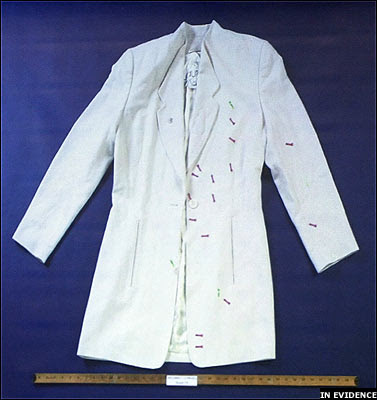 Like a huge landmark the key piece of evidence for the defense is that white diner jacket Spector undisputedly wore that night. What was missing was the messy blast of blood, tissue and gun shot residue that was expelled as the gun went off in Clarkson’s mouth. The only blood on the jacket was clearly a few smears transferred as Spector futilely tried to help the dead woman. Try as they might they could find no reason for the lack of blood spray, gun shot residue or tissue other than a solid fact, Spector was not near Clarkson as she shot herself.

It was laughable to see prosecutor Pat Dixon present an animated video of a figure depicting Phil Spector with a white dinner jacket standing in front another figure suggested to be Lana Clarkson putting a gun in her mouth shooting her. The animation was bloodless. Only a great magician could pull off such a feat.

The un-sequestered Spector jury is free but for an unenforceable court order to read every online newspaper, blog or YouTube video on their home computers. I promise you that that’s exactly what they will be doing this weekend. Last year I had members of a criminal jury reading my blog about the case they were deciding. I collected the ISP numbers. The case ended in an acquittal and my blog supported that outcome. Thankfully the defendant could not be retried.

Will emotion and a hate campaign overcome truth and justice? Will the jury be able to separate science for the impossible scenario of the prosecutor’s theory? We will find out sometime after the jury is instructed on Monday morning.

Whatever happens I don’t expect the defense lawyers to shake hands with the prosecutors.

Paul I know of your criminal defense work and know Spector would heve been in the best possible hands had you been the defense investigastor.

I see where the viewers of court TV are divided 70% to 30% for conviction. considering that bunch of disfunctional folks who flip thir remotes from Court TV to Jerry Springer, Spector will be cleared.

Why didn't the defense try to replicate the alleged incident to show the difference in the two jackets, Phil's, and one that was worn by someone close enough that they could have pulled the trigger? Or did the judge ban it with the usual BS claim that "The conditions are not exactly the same"?

The only way to replicate the death of Lana Clarkson is through the exact same exercise with a living human with real blood pressure. Cadavers don’t bleed and won’t work.

It was just not practical to put someone to death in order to prove a case.

Science doesn't lie, emotion can be stretched and that is just what Dixon did. To me that animation didn't tell me anything and was only used to inflame the jury's emotions. Judge Fidler should have never allowed this cartoon, it's not evidence. If the defence tried to use this you can bet Jackson and Dixon would have objected and good ole Judge Larry would have granted it for them. This is one of the most one sided trials I have seen with regards to rulings. Do some research on Pat Dixon too and see what you come up with. He sure doesn't play the game fair and must be exposed.

I hope Spector goes down - he murdered that poor girl! Yes, a broke whore can be murdered too.. That's the charge, "murder" so why try her life for being broke and down and out? If she wanted to commit the dutch act she need not have waited to go all the way to Spectors house to do it - how silly a defense is that. If the jury comes back "not guilty" we will know it's simply the "O.J" composition - you know, those jury people who just hate "da po-lice".. Get it? If they come back "guilty" they did their job. Old Copper

This trial consisted of unethical prosecutors and a biased judge.
There is no evidence that Spector shot Clarkson, but lots of evidence he didn't.
And what's up with Alan Jackson pretending he works for free?
Jackson and Fidler are 100% dirty bosom buddies and LA is craving a celebrity conviction. Phil Spector is innocent and I'm praying the jurors will find him NOT GUILTY.

Paul I know you told me about last years jury reading your blog. But I'm surprised you let the cat out of the bag. Hopefully Spectors jurors will read yours. I had one article on my blog recently, but I was just retained on it. They didn't know I made comments about that arrest on my blog, but I did tell the atty and client and then I deleted it. Keep up the good work. X cop/PI

People are not focusing on Phil Spector's white jacket which proves innocence and reasonable doubt.

People are getting excited at how talented Alan Jackson is as an actor in his closing argument with his "Lana don't go scene."

Alan Jackson has the looks of an actor and thats what he should be, an actor - not a prosecutor.

Alan shouldn't be a prosecutor as he gets too emotional and wrapped up in his own POV which he embellishs with his lies and that is dangerous for any defendant and justice.

A prosecutor is supposed to be happy if they are wrong about a defendant. They are supposed to be searching for the truth? I don't see that happening in this case.

Why are ordinary talents like Prosecutor Alan Jackson and and accident prone Lana Clarkson in their own desperation for fame - willing to tear down others legendary reputation in order to grab the limelight?

Why is Alan Jackson so jealous of Phil Spector's fame? Does Alan Jackson have such low self esteem that he needs to put Phil down in in order to feel better about himself or is he after that fame and the limelight himself?

Paul.
When this case began I was convinced you were crazy and Spector killed that girl. You must have seen something everyone missed because you have been proclaiming Spector's innocence.

You have made me think, and ask questions. You turned me around 180 degrees and are absolutely right about this case. Too bad Spector's lawyers did not have the brains to put you on the defense team

Why didn't Prosecutor Alan Jackson take his "Lana Don't Go scene" further back to an earlier time when Lana left her home on Christmas Eve in 2001 to go to a party where she "accidentally" broke both her wrists before she ever knew Phil Spector.

What Alan Jackson omitted and failed to tell the Jury (and everyone else) is that the Jury and everyone else should have been shouting "Lana don't go to the Christmas Eve Party" back in 2001 as well as shouting "Lana don't drink don't drink alcohol...or you may fall!" - prior to Lana breaking both her wrists on Christmas Eve 2001 - a year prior to Lana going home to Spector's house in 2003 where she drank alcohol and again - had another accident because of Lana's modus operandi - alcohol and accident.