Today JFK Would Be Branded A Right Wing Extremist 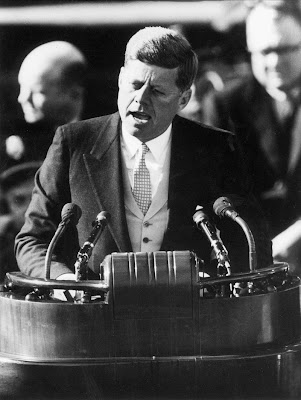 John Fitzgerald “Jack Kennedy was born with a silver spoon in his mouth. Being driven by a master Capitalist, Joseph P Kennedy, Jack went all the way to the top. He did pay his dues every step of the way as a patriot.

When the American way of life was threatened during World War II, young Kennedy tried to enlist in the Army only to be rejected because of a bad back.

Not being deterred he went to the Navy and had his dad call in favors so he could go to combat for his fellow Americans. Kennedy wound up as a skipper of a PT boat and undertook a disastrous rescue mission. The deaths and injuries on that PT boat are convincing evidence that Kennedy was no coward. Kennedy in fact was like every other member of his crew, a genuine hero.

Jack Kennedy understood the importance of a national defense and our Second Amendment when he became a life member of the National Rifle Association.

Kennedy was elected to the Senate and later as our President. The Communist menace was everywhere including inside our own government. Kennedy went to Berlin, Germany to proclaim our alliance to the German people standing up to Communism and gave his famous, “Ich bien eine Berliner!” speech at the newly erected wall to imprison a nation.

Kennedy stood up to the Soviet Union and at least made an effort to defeat Fidel Castro during the failed Bay of Pigs Invasion. The Communists in our own Congress deserve credit for the failure of that mission. When the Soviet Union brought missals to Cuba threatening America Kennedy stood tall and strong.

I will never say I agreed with everything Jack Kennedy did, but I never once questioned whose side he was on. Imagine a President today saying, “Ask not what your country can do for you, but what you can do for your country.” Instead today the presidential message is, “We must redistribute the wealth.”

Of course after France gave up it was JFK who brought our troops into the effort to protect South Viet Nam from Uncle Ho and his Chinese Communist friends. It was Uncle Ho’s fellow American Communists that prevented a win over the North by shortchanging our military troops of their weaponry and other resources. As a result of our own Communists nearly 60 thousand of our young men came home in rubber bags. We can’t blame JFK for the acts of the traitors in our own Congress.

I don’t know what happened to his brother, Teddy Kennedy but the Irish curse of alcoholism pickled his brain for sure. He went the way of the Bolsheviks.

Today, I know that Jack Kennedy would loathe what the administration of Barack Obama is doing today. We must stop this cancer on America before it spreads any further.
Posted by Paul Huebl Crimefile News at 10/29/2009 01:47:00 PM

Paul that was 100% RIGHT ON. I too love and admire JFK. He was more conservative then many alleged republicans are now. I do appreciate liberals that state they are liberal. But I despise those closet liberals (or left to the centers) that wear the colors as a conservative and/or Republican.

I recently had a dialog with another PI colleague in the Inland Empire. He advised me that my beliefs are "extreme" which is a nice way of calling me an extremist. He declares himself as a "life member" of the GOP and a hard core "conservative."

Frankly he needs to join the Democratic Party and quit compromising the GOP. Only the liberals utilize divisive distractions and smoke screens without any facts, by calling true conservatives 'extremists' (and now even racists.) But hey…at least I don't belong to any 'all white' businessman associations, as does this PI whom belongs to Hispanic associations.

I could not imagine belonging to a ‘white’ businessman's association OR ANY white organization only for a particular race.

2. The Republican Party has gone to the left of the center.

What happened to the days when people and parties would ethically tell you where they stand or stood? Now there a bunch of puppets on strings / camillians just trying to all get along.

You forgot he ran for office on the "missile gap," an argument that we needed more nukes because those notorious pacifist lefties Dwight Eisenhower and Richard Nixon hadn't done enough to keep up our nuclear arsenal.

Once knew a fellow who actually knew and worked with Robert Kennedy. He said the guy was a good official and a conservative until JFK was killed. That was a very heavy emotional blow to him, and a bunch of lefty advisors got to him thereafter. Maybe Ted went the same way? Tho he never had the brains and drive of either of the others.

JFK did alot more than that, he was an American hero. JFK founded the Navy SEALs, the USA Special Forces "Green Berets", and the Peace Corps.

JFK printed five billion dollars of real US Treasury notes while attempting to take us off of the unconstitutional feeral reserve notes. This was what got him killed.

JFK also delivered this speech which has and will continue to be overlooked by historians:


JFK tried to warn us, is it too late?

The US Army Special Warfare Center at Fort Bragg, NC is named after JFK.

All Specops warriors hold a degree of reverence for JKF.

When JFK founded the Green Berets he said there will be a time, a calling and a place. JFK was a visionary, the time and place was the future USA.

Is this why they are getting rid of the Green Berets?

JFK would be considered a right-wing kook today by the libearl establishment, in the same boat as Ron Paul.