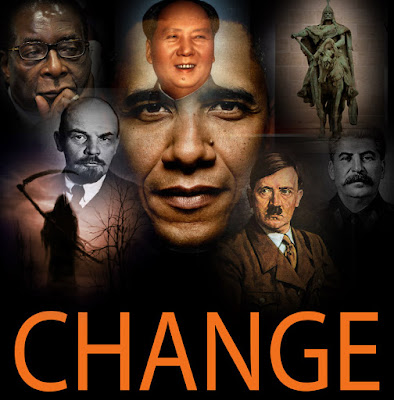 Washington, DC-- Barack Obama’s administration has shut out America. Obama's Communists, racists and other anti-American advisors have done what Hitler, Castro and Stalin did. They allo formed policy in secret. The danger here is that the mass murders ordained by these despots were not planned in open meetings either.

Obama has misled even his strongest supporters on every campaign promise he has made. Obama must be removed from the Whitehouse before it’s too late.
Posted by Paul Huebl Crimefile News at 10/20/2009 04:34:00 PM

NEW YORK — President Barack Obama is having some fun at the expense of those who criticized him for trying to help his Chicago hometown land the 2016 Summer Olympic Games.

Addressing donors at a Democratic Party fundraiser Tuesday night in New York City, Obama said he believes in a strong opposition but doesn't like it when some folks root for him to fail on health care or ... on getting the Olympics.

In a mocking tone Obama said: "Who's against the Olympics? What's up with that?"

Some Republicans criticized Obama for flying to Denmark earlier this month to boost Chicago's Olympics bid. Critics said he should have stayed home to deal with health care, unemployment and Afghanistan, among other issues.

Brazil won the right to host the Games


Let's keep the torches lit and the pressure on. The sooner Obama is rendered impotent, the better for America and the world.

Here's some good news out today:

"The Rasmussen Reports daily Presidential Tracking Poll for Wednesday shows that 27% of the nation's voters Strongly Approve of the way that Barack Obama is performing his role as President. Forty percent (40%) Strongly Disapprove giving Obama a Presidential Approval Index rating of -13. That’s just a point above the lowest level ever recorded for this President. It’s also the sixth straight day in negative double digits, matching the longest such streak."

Obama wants our freedom and tax dollars as his Marxist play things. Let's push back HARD and ensure that he doesn't get them.