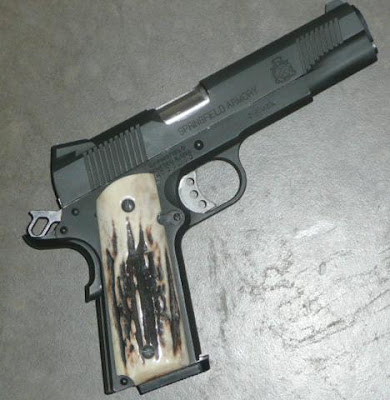 Chicago, IL—City officials know the days of Chicago’s gun ban will be over by next summer. The reason is very simple Chicago’s politicians have been violating their citizens Civil Rights for nearly three decades.

Today the polls are showing that an overwhelming majority of Chicago’s citizens want the gun ban scrapped.

The right to possess firearms and use it for self-protection is a right to survive. It’s difficult for me to imagine people willingly giving up the right of self-defense, but if you can remember the Nazis had no trouble getting Jews to line up orderly, disrobe and accept being executed.

Chicago is currently being run by a gang of criminals that hold office. They have turned taxation into extortion and are looting the city dry. They can be counted on to try and turn Chicago’s gun registration laws into their very own ATM machine.

They cannot tax you for enjoying a right or they’d still have poll taxes in the South. Of course they know that it will take years for a legal challenge to get resolved in the courts. If you allow them they will continue to violate your rights through gun registration taxation.

The late Mayor Richard J. Daley brought us the gun registration law in 1968 with his personal promises that registration would always be free and that it would reduce crime by making investigation easier. Both promises proved to be false.

As it stands they will collect $65.00 per gun per year. We know that they will be as punitive as they possibly can by raising the fee to whatever they want.

There has never been a better time for a campaign to repeal Chicago’s gun laws. Call 311 and ask for the Mayor’s office. Tell him to restore our rights to self-defense.

Most important, after you make the call get at least two of your neighbors, relative or friends to also be heard.
Posted by Paul Huebl Crimefile News at 10/04/2009 05:47:00 PM

This is an interesting case for a couple of reasons.If SCOUTUS rules in favor of the gun ban,this will give the States and local governments more power over the feds.
Example:In the State of Montana there is legislation that will allow Montanans to manufacture machineguns if they they are only sold and used in Montana.If SCOTUS rules in favor of shitcago this will strengthen Montanas claim under commerce laws.

If SCOTUS rules in favor of the NRA/ISRA,supporting the Second Amendement it will take away some power from the States to be independant,but sticking it to long time anti-gunners and those against gun onwership and self-preservation.

The benefit of the Bill of Rights is incorporated. No where does any state lose independence other that that horseshit Interstate commerce clause. that must be defeated.

This victory has no down side.