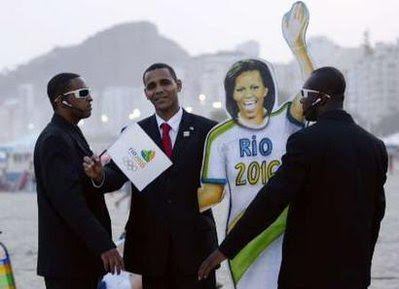 Chicago, IL—The pro-Obama/Daley forces are screaming today. That are passing the blame around to everyone they can. They’re mad because too many of them gambled their personal fortunes of getting the games in Chicago. I hope to see some bankruptcies filed by the politically connected losers that speculated with land investments.

The blame needs to rest squarely on the shoulders of the Obama/Daley/Burke Crime Families. This was about dodging the world class corruption Chicago is so famous for. Why should wonderful young athletes from all over the world be tainted by the extortion, bribery, and savage violence in Chicago?

Thankfully Chicago's politicians could not silence bloggers like Second City Cop or myself. Many people wrote letters to the IOC urging them to not dishonor the Olympians by holding the games in Chicago. There were the videos on YouTube and thankfully the IOC did the right thing for Chicago’s taxpayers.

This is not an issue of Republicans, Democrats, Black or White. Every citizen of Chicago rich or poor needs to make their incumbant politicians walk the plank!

Chicago’s poor African-Americans need to examine how they have been exploited and victimized by the Daley/Burke machine that takes their vote giving nothing in return. Promises from the Chicago Democratic Machine don’t bring dignity or respect, just more poverty.

The Liberals of Chicago don’t care about rampant corruption as long as they think the Leftist agenda is being served. They want fellow Liberals elected at any or all cost.

As for the taxpaying people that just want a place where they can work and safely raise their children they have obly two choices, get out of Chicago or get rid of the crooks.

The only way Chicago can rid themselves of the crooks is to stop voting for incumbents. Politicians must be treated like dirty diapers.

Please pass the word and circulate flyers,emails,text messages,phone calls,additional web posts,etc. Bring your friends, neighbors, relatives, coworkers. Retirees please step up and back your brothers and sisters in blue. We need your help now.

The international and the national press are still focused upon Chicago and will pick this up. It is going to be cold soon, now is the time.

Now is the time! Please pass the word and lets welcome the Mayor home.

The Mayor has declared war upon us, so be it. Lets show Duggan that we are truly warriors!!!

I blame the savage and the corruption here for not getting the games.The IOC voted wisely.