The GOP Must Die 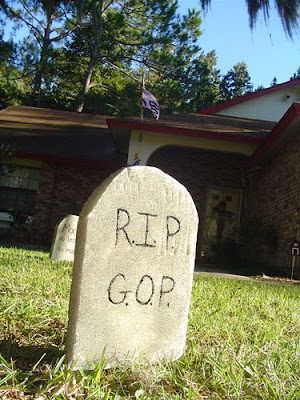 There was a time when the Republican Party represented Conservatives and their views. That’s no longer the case as they leadership has embraced pretend Conservatives like John McCain, Mitt Romney, Rudy Giuliani, and of course both Presidents named George Bush. These are men with a very pronounced Left Wing agenda and records that are in virtual lockstep with Democrats.

These are tax and spend, big government Liberals that have never had anything in common with Conservatives. To a one, they were and are significantly Left of the revered and assassinated John F. Kennedy. Kennedy is a Democratic icon who enjoyed a life membership in the NRA, and a fiscally responsible administration that took the hard line with our Communist enemies.

The GOP leadership has been corrupted by the free flow of pork projects, deal making and personal enrichment to the determent of American taxpayers.

There is nothing Conservative about today’s GOP. The GOP has been hijacked and needs to be abandoned altogether. A new Conservative party must come from the ashes of the GOP that will unite Conservatives.

Conservatives need their own party. The Libertarians can fill the bill but they first need to raise their political and social profile since most Americans don’t have a clue what a Libertarian really is or is not.
Posted by Paul Huebl Crimefile News at 10/26/2009 09:37:00 AM

Email ThisBlogThis!Share to TwitterShare to FacebookShare to Pinterest
Labels: GOP

The Republican Party is a treacherous and traitorous organization. Constitutionalists and those who believe the term "conservative" (as in Barry Goldwater was a conservative and Ronald Reagan was a conservative) applies to them, should vote for independent candidates who reflect their own views and values. Voting for the Bolsheviks or the Mensheviks will get you more of the poison you have been drinking for the last 100 years. The end of the Republic is near. Whatcha gonna do about it?