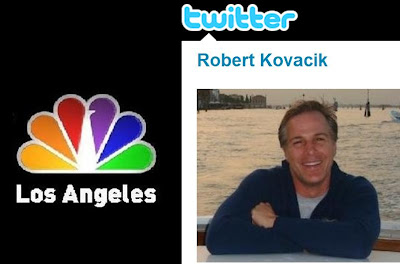 Los Angeles, CA—As the news sources from radio, TV and the Internet are increasingly more plentiful, keeping track of your favorite reporters seems to becomes more difficult. The truth is it is easier than ever! One thing for sure we can ignore TV news schedules and look for those news packages on the net.

Most news reporters don’t go the extra mile to keep us informed. They get their assignments and get something out to satisfy the suits back at their stations. Some reporters bring a little show business to their work because keeping the attention of the audience is paramount, but generally there’s little else.

Most of my favorite reporters are some of the incredibly attractive women and I watch them for all what some people would say are the wrong reasons. I don’t care about weather unless it’s extreme. I watch a certain hot blond on KCAL/KCBS-TV not to learn about the weather but simply to watch her.

When I want to get the hard news too many of the lady reporters have a habit of getting out of the way of the news and covering it from the distance. For me I’m not happy until the reporter gets inside the story from the inside. Timid reporters suck.

One reporter that can be counted to get right in the center of the news is KNBC-TV’s top morning news gun, Robert Kovacik. A while back he was reporting on an early morning murder story and the manhunt police were conducting for the reportedly armed and dangerous suspect. Kovacik encountered the suspect while on a live shot and never blinked as he began a totally unexpected, exclusive interview with the killer!

I’ve not seen that kind of work since KSAZ-TV reporter Steve Kraft and I approached and interviewed numerous wanted fugitives in Phoenix. Okay I confess I was packing a .45 for personal protection at the time. Some of the fugitives whined about not wanting to go to jail but there was no hostility.

Kovacik certainly was unarmed and if he had any fear at all he never showed it as he went the extra mile to make sure his viewers got the whole story.

With Twitter and Facebook reporters can make their work available 24/7 and their work can be viewed anywhere in the world. I will soon be globe hopping and getting my news from Geneva and Berlin. I often go to India and feel empowered when I can see my personal favorite’s on the Internet. Yep, I will need to see what the weather is in L.A. too!

As our news sources improve their websites it’s never been easier to skip the junk and go right to the pros for your information.

Email ThisBlogThis!Share to TwitterShare to FacebookShare to Pinterest
Labels: kovacik

Hello from Russia!
Can I quote a post "No teme" in your blog with the link to you?