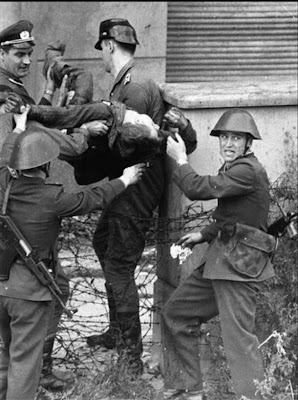 Dying Peter Fechter is carried away by East German border guards who shot him down when he tried to flee to the west in this Aug. 17, 1962 photo. Fechter was lying 50 minutes in no-man's land before he was taken to a hospital where he died shortly after arrival.

The agency that manages the records of former East Germany's dreaded secret police has uncovered an order for border guards to fire on escaping citizens that is far more explicit than others on record, an official said in remarks published


Berlin, Germany—November 9th 1989 freedom came to Berlin as the dreaded wall finally came down. The Communists ruled with their guns, jackboots and an iron fist until that failed form of government fell under its own weight.

It was not all celebration since the Communist system created two generations of totally dependent people who were never motivated, able to fend for themselves or realize opportunity.

The former Communist citizens were used to living off other people’s money. They were demanding free apartments, food and were prone to criminal activity when their needs exceeded the handout they received. Suddenly, these folks were introduced as equal citizens of a united and free Germany.

Some of these people found education, self-sufficiency and are proud to be free today. Others still pine for the old nanny government. Communism did tremendous damage to these people and it may take generations to repair.