Truth and Treason—Can this Happen Here? 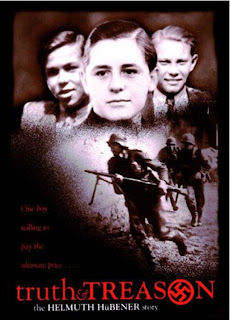 Hamburg, Germany—Young Helmuth Hubener was a typical Christian German lad but for being in the Mormon Faith. He joined the boy scouts and that progressed to the Hitler Youth in 1942.

Hubener obtained a radio and learned the shocking truth of what Adolph Hitler was doing to Germany by listening to BBC German language broadcasts. Getting caught listening to the forbidden broadcasts was a serious criminal offense.

The lad felt it was his duty to get the information out and did so with the help of two young pals and a typewriter. He got caught and at age 17 was brought before the notorious Nazi Judge, Roland Friesler at the People’s Court in Berlin (Today the modern Sony Center sits on the site of that terrible place) for a show trial.

Hubener’s fate was quickly sealed with a death sentence. He was brought to the execution chamber of Berlin’s Plotenzee Prison and beheaded by the guillotine for resisting the tyranny of the National Socialist Regime.

Young Hubener became one of thousands of good Germans that were arrested, tortured and murdered for revealing the closely guarded secrets of the Nazi atrocities.

It’s an undeniable fact that any government even ours could degenerate into a murder machine that the Nazis and Communists operated. We must zealously protect the Bill of Rights or live and die in a monstrous police state.

2012 will bring the premier of a film based upon the book by Susan Campbell Bartoletti called The Boy Who Dared. Haley Joe Osment (Sixth Sense) landed the starring role and if the trailer is any indication of how the film will play it’s bound to be a winner.

Watch the trailer below and after that is a video I shot this past March at the actual execution chamber where Hubener and thousands of other good German men and women was murdered by the Nazis.

I saw this posting link on the following blog:

And now I am also saving your web address to my list of favorites. Some very good blogs out there and it seems many are from Chicago cops too.

Any word on when the video will come out?