Need Cops In Chicago? Here is a Novel Solution that Includes Funding! 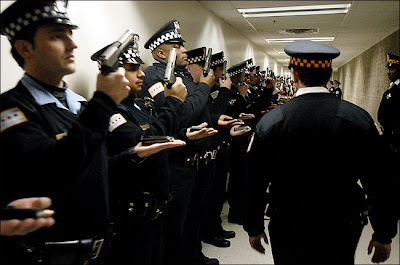 Chicago, IL—The Windy City needs to give their police department some serious CPR. The department is undermanned, out-gunned, demoralized and dysfunctional because of miserable management and political shenanigans.

They can continue as they have and things will deconstruct to the point of anarchy. They can apply a Band-Aid but that can’t and won’t stop the public safety hemorrhage.

The city should auction off a prime parcel of lakefront property with the proviso that it be used for a small business commuter airport like the one Richard M. Daley destroyed in the middle of the night a few years ago.

Next they could do the same with another small stretch of property for a world-class gun range, training facility and pro shop to replace to old Lincoln Park Gun Club they shut down decades ago. I think it is abundantly clear to Mayor Emanuel and Superintendent McCarthy that the Illinois gun carry ban is about to end. The right way to deal with this is to invite the public to learn how to use the weapons properly, safely and justifiably. Perhaps one could be established on the North side, and another on the South Side.

The city could also get really serious about making Chicago the place to make feature films and TV series. Leasing out city buildings like abandoned police stations and courtrooms to filmmakers would put them to good use. Also, film permits need to be granted to students and such with minimal red tape and cost. Today’s film students are tomorrow’s major directors.

The catch is the money is to be used only for police resources. The funds could be used to hire back seasoned officers that have already retired. The savings in training costs alone would be quite substantial.

Next officers need to be encouraged to provide their own serviceable carbines and shotguns, as they must do now with their duty side arms. This will help level the playing field between the officers and the heavily armed street gangs.

The political hiring, assignment and promotion of cops must end. The department must use proven civil service, personnel management that fairly and equitably rewards officers for excellence. The phone calls from clout heavy reverends and ward healers must go unanswered.

If these things were accomplished over the next year there would be a new attitude within the ranks of our Thin Blue Line. After a while we could phase out the retired hire back program for traditional police recruits.
Posted by Paul Huebl Crimefile News at 7/17/2011 07:07:00 PM

Nice idae, but can't work. Where will the politicians make their money? It's not like they get paid by the taxpayers, right? That's why they lie, cheat and steal.

Only for police resources,in Chicago.The cash will be stolen before it reaches the troops.