Is This What Chicago has Become? 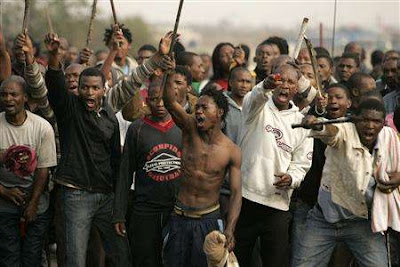 Chicago, IL—Occupants of an apartment on this North Halsted Street recorded some video last night of a mob of African-Americans that viciously beat and stabbed their victim.

Nobody in their right mind would live here and pay taxes. It’s too bad the person shooting the video camera was not shooting a .12 gauge shotgun at the savages committing this outrages crime. The use of that shotgun on the mob would have been legally justifiable for sure.

Legally justified until the black reverends and black community rallied and pressured the elected officials to place charges against any white person who tries to stop one of these black mob attacks with the use of a firearm.

Face it... Our elected officials kiss the welfare ghetto people's asses! And they shit on the working people... plain and simple.

It's what every metropolitan in the USA has become - a liberal multicultural cesspool. It's amazing what the original 600,00 slaves brought to america (yes, only 600,000) have Become. Send them back to africa where there isn't any racism.

Yes.Im thinking of opening a guided tour of 007 called "Englewood Adventures".This way folks can see moo&oink in their habitat doing their thang from inside a coverted Brinks Amoured Car.

If you look at this video carefully, observe the mannerisms and body language of these assailants. This apparently took place in Boystown. In my humble opinion, these are nothing but a group of limp wristed fancy boys who got in a lovers quarrel or something.

Just because thet are limp wristed m/1's don't underestimate their potential for violence. its the same thing in several bars in 014 every weekend (green dolphin and Krush). My neighbor drove through boystown on the way to wrigley on saturday and said he saw multiple street fights with ghetto black nancy boys. They are all savages regardless of their sexual preference.

Nice job on the part of FOX pointing out the precise location of the witnesses home. I'll bet they never talk to the newsmedia again.