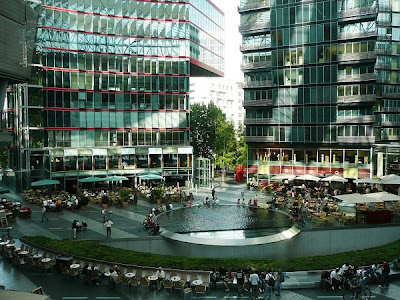 Berlin, Germany—Summer time in Berlin is always the right time to visit this city. Berlin has a blend or rich history, a modern skyline and no shortage of places to enjoy life. Berlin is truly an exciting city.

Berlin is also a soft terrorist target. Germany has never fully recovered from the stain of the Nazi period and any strengthening of their police resources raises eyebrows everywhere. Government is not nor ever been the answer to terrorism anywhere. Government is never up to that task anyway.

The Sony Center is probably the most vulnerable soft target in this metropolis. The place is loaded with law-abiding, unarmed people waiting to be victimized. The police would arrive too late and be unable to respond to a major crisis here.

What is a better solution to deal with terrorism here and for that matter anywhere? The answer lies within the ranks of those law-abiding potential victims enjoying their visit.

Government must demand that citizenship responsibilities include a commitment for the defense of our cities and way of life. Law abiding citizens must be trained, armed and understand their duty to defend self, family, neighbors and country.

If only 15 percent of the visitors to the Sony Center’s law abiding visitors were trained and armed anyone attempting to attack would most likely fail with minimum innocent casualties. The citizens would have a fighting chance to survive and no traditional government force could out-perform the citizens already on the scene.

We don’t need police states with shock troops to control hard corps criminals and terrorists, just ordinary citizens with a strong commitment to public safety and a sense of duty.

Citizens must begin to rely on each other for necessary protection. The terrorists will always be able to outsmart government. Terrorists have always counted on governments to make sure their potential victims are unarmed and defenseless.
Posted by Paul Huebl Crimefile News at 7/29/2011 08:36:00 AM

It's not really Germany any more. The Germans aren't free to speak out against the Marxists. The article says the Germans haven't cleansed the stain of Nazism yet. Probably because the Zionist propagandists won't let it go. Too much money to be extorted yet. Over 3000 years of German history and only 11 years of Nazism. WW2 ended 66 years ago, get over it. No one remembers Stalin.

WHER ARE THE forensic and other nitty gritty details of the Norway shooting? Has anyone noticed that the number of dead on the island exactly corresponds to the capacity of four 17-round Glock mags? Yet the authorities say he used an "automatic weapon". Were they all head shots? It defies imagination that all the victims would simply offer up their heads to be shot; and if some were shot running away, it had to take more than one shot per kill, and hence, the killer had to insert at least a fifth clip. But then how come the toll stops at the number 68? What did he do in the interval, some reports say up to one hour, between the first shootings and his second sweep? With your investigative savvy, can you point out a site to go to for better info than the lamestreamers have?