Chicago Thug Kills a Woman and Cops Will Get the Blame 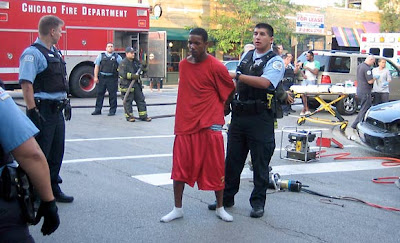 Chicago, IL—West Side thug, Marquis Harrison, 16, stole a nice Range Rover in Old Town. He was observed by police zipping through a stop sign and rather than quit Harrison tried to run the cops over and recklessly fled leading police on a wild chase.

Harrison was loaded up with vodka and Ecstasy as the deadly weapon he drove broadsided Marciea Adkins, a police dispatcher on her way to the safety of her home after working the graveyard shift killing her.

Now Harrison is facing a Murder beef as well as a host of other felonies. The bad news here is he probably will escape being tried as an adult for his adult criminal acts.

Soon we can count on hearing from those that will blame the police for the murder saying it was their chasing of Harrison that caused the young thug to kill Adkins. We will probably hear that the police stop was a case of racial profiling made by racist cops looking to ruin the life of some poor Black kid.

When it comes to policing the African American people, we truly can not win.

It's always everybody elses fault but their own.

Wake up and smell the coffee.

9 Murdered and over 35 shot this weekend in Chicago, all black shooters... But they are 100% right all the time!

Police chases rarely end well. Once the race is on, its gonna get ugly.
Our juvenile system is bad. Adult crime, adult time. SCOTUS should never have taken the death penalty off the table for evil kids.


there just aren't enough of us to do shit about it.

How long till we hear he was an honor student about to turn his life around?

And they'll photoshop him into a cap and gown as well.

Second City Cop had an article which stated that this suspect is an honor student at a Chicago charter high school.