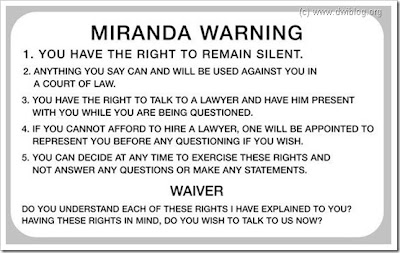 Chicago, IL—We all know that Cook County State’s Attorney Anita Alvarez hates Conservatives, cops and gun owners. We also know that she will indict anyone for murder that uses deadly force that she can despite reasonable justification.

Most experienced officers can early on read the signs of a righteous shooting. We need to give taxpayers the benefit of the doubt when they have shot up some young thug whose mother will avow he was just turning his life around.

The patrol men and women responding to that kind of a shooting should start their investigations with enhanced Miranda warnings even before the point of accepting a shooters statements or excited utterances. Most people involved in justifiable shooting want to make a case of necessity to you on the street out of presence of a lawyer. It is most often very difficult to shut them up because of all the excitement. Please, do them the favor of stopping them cold.

Tell the shooters that you and the detectives that follow up the shooting will not be making the decision to charge them with a crime. That as we know will happen on the whim of some ASA dancing to Alvarez’s depraved music.

Advise these folks to say nothing without a lawyer and quickly tell them they won’t be arrested if they invoke their rights with you and the dicks. Tell the potential shooter you’re not psychic and without a confession you’d not have enough evidence to arrest anyone.

The passage in the case report is always best read that, “Reporting officer asked (blank) what happened and he invoked his rights to remain silent and asked to have an attorney present.”

Your report can then reflect a whodunit angle since people refused to talk. Alvarez’s hands will be tied.

You simply give people their rights a little early in the game and save them from spending a couple of years in jail while they wait for a judge or jury to free them.

I’ve yet to see a CR get issued for handing out Miranda warnings too early in an investigation.
Posted by Paul Huebl Crimefile News at 7/16/2011 06:53:00 PM

Sound advice CF,too bad most officers I know think they are the only ones that should be carry guns and luv to jam people.

Sound advice CF,too bad most officers I know think they are the only ones that should be carry guns and luv to jam people.

I have no idea what Officers you know but the ones I know will let a law abiding citizen who is carrying go on their way. I have over 20 years on the CPD and I can tell you I have NEVER locked up a legit citizen for UUW. I believe in the 2nd Amendment and do not think City or State law supersede it.

Don't believe the hype from our Politicians and "Bosses". The great Majority of working CPD officers respect your 2nd Amendment.

As a retired PO, my statement will be:

"I want to fully cooperate with you. Please put your questions in writing. I'll go over them with my attorney and get back to you. I'd like to leave. May I leave now?"

Right on, dude. Most of us can know in about 90 seconds if a shooting was righteous. It's incombent upon the reporting officer to make damn certain that the "real" victim, ie., the shooter, keeps his/her mouth shut long enough to lawyer-up.

It's the moral, ethical. correct thing to do. jms

Anonymous said...
Right on, dude. Most of us can know in about 90 seconds if a shooting was righteous. It's incombent upon the reporting officer to make damn certain that the "real" victim, ie., the shooter, keeps his/her mouth shut long enough to lawyer-up.

It's the moral, ethical. correct thing to do. jms

No Dude, sorry but you can't tell in 90 seconds if a shooting is justifiable or not. Many factors must be thoroughly checked out. Obviously you never did this for a living as I have for over 20 years, so kindly get back on your BugHouse Square Shine Box and go away. You are probably the one who told General Custard that there were only a couple of drunken Indians waiting to warmly greet him, Simpleton...

Paul the big tip off here is, "anything you say CAN and WILL BE used AGAINST you, (not for you) in a court of law. So keep your mouth SHUT!!! Retain a lawyer, let them do the talking for you!!!