Is the Obama Administration Involved in a Massive Gun Running Conspiracy? 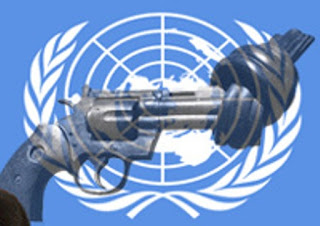 Phoenix, AZ—The embattled Bureau of Alcohol, Tobacco and Explosives was given a massive infusion of cold hard “stimulus” cash by the Obama Administration. This agency is our, Secret Gun Police. What did they do with all that cash you’re asking? The answers are coming Fast and Furious in an unfolding criminal conspiracy.

The Obama Administration has operated a shadow government of un-vetted, unelected czars that make government policy as they operate in secret. Secrecy has been the most common ingredient and trademark of every rogue criminal government on this earth.

The Obama Administration exists today because of massive campaign contributions from the political Left wing that wants a one world Socialist state.

The Left with the assistance of the Socialist majority United Nations have been on a mission for global gun control. They seek to only have member governments armed and for nefarious reasons.

Resistance to Socialist government by oppressed people is impossible if you can keep them dependent, helpless and most importantly disarmed.

Every world despot on earth has eliminated civilian gun possession in the name of Public Safety. It’s a scam to say the least as these Socialist governments; all of them exterminated any and all forms of resistance. Genocide and mass executions have always been the primary tools of Socialists.

No government can ever have Absolute Power if their civilians can keep and bear arms. Make no mistake the United Nations led Socialists want Absolute Power. In the United States there is a massive effort to circumvent our Second Amendment in our Bill of rights through a United Nation's Civilian Gun Ban Treaty.

It will all be legal if Americans don’t resist and shut down this criminal government conspiracy. Our Leftist politicians have waged a four decade war on gun rights and finally seem to have lost their ability to end gun rights in America. Our Second Amendment is still standing, at least for now.

The Obama Administration makes no bones about wanting to sign on to the Global Gun Ban Treaty. To do so they need to show our nation’s politicians that were are under a public safety threat and that our gun rights are responsible for the killing of innocent people in other countries. They found a way to accomplish their mission. The facts are trickling out in the form massive criminal conspiracy our government secretly managed in what is being called, Gunwalker and Fast and Furious.

In Phoenix nineteen men and one woman are under indictment. Their crimes were to use American taxpayer funds provided by government agents to illegally purchase and export weapons to Mexican drug cartels.

The scheme became public when BATFE agents came forward to expose the government scheme. The Obama Administration has successfully muzzled most media organizations on this story but between bloggers and Fox News the lid has been blown off and members of Congress have opened their own inquiries.

Since Gunwalker along with Fast and Furious were leaked we learned that border patrol agent, Brian Terry was murdered in the line of duty on December 14, 2010. Two of the BATFE illegally trafficked weapons were recovered by investigators at the scene were linked to that horrible crime!

On January 19, 2011 Jamie Avila, Jr. and 19 others were secretly indicted for a host of crimes from, illegal gun-trafficking and drug peddling. These people are facing absolute life in prison if they are convicted. Are these indictments simply being used as a way to insure their silence?

The Obama Administration knows that they can shut up those indicted for the pendency of their prosecutions (at least the two solid years it will take these cases to grind trough the criminal justice system). The indicted defendants can be expected to invoke their rights to remain silent until they are no longer in legal jeopardy.

As for the government and the involved agencies there has been a stone wall of silence in place. They have obstructed every way they could and continue to do so. Of course keeping a lid on this would keep it out of the 2012 presidential election campaigns.

The only remedy here is to appoint a special prosecutor to deal with this grand mess since all fingers point to the Obama Administration and their Attorney General, Eric Holder.

A special prosecutor would have the power to grant immunity to those offering truthful testimony that would aid in prosecution of those government officials that are behind the criminal distribution of deadly weapons to criminals engaged in Mexican drug trafficking.

We need to force our government to appoint an independent prosecutor giving him or her, the necessary funding to investigate and prosecute these cases because the Obama Administration is embedded so deeply in this conspiracy.

GREATEST FRAUD IN US HISTORY!

the guns are being directed into the hands of Urban Blacks, to destroy the "nation of cowards" from within. Van Jones is their leader.

ALL DEMOCRATS ARE COMMUNISTS SAYS:

The obama administration was born of recruiting criminals from the political gutter TRAINING GROUND of Crookago, Illinois, and the Socialist Stomping Ground colleges of their bogus from day 1 Leader BHO, chosen TOOL of the Soros type Marxists. . The outright Fraud perpetuated on unwitting American Voters was accomplished largely by the now fully identified Amero-Communist News Media, Entertainment Industry, and the Socialist [Democrat]Party USA, and fully endorsed by the UN Marxist-Globalist Elites and their Green Brigade Communist Allys worldwide. They have, however, forgotten one thing. The resolve of the American People. We haven't been thru numerous Wars and fought and died so hard for our Independence to be taken over by a bunch of Weaselly Pencil-Necked Bumkin Politician Losers like these. Strap down and be ready for political Battle people, look forward to it with great zest and gusto, as our Forefathers did. Silent Storm IS coming. U.S.A. Communists BEWARE.. YOU, started it, and will have now longer anywhere to hide. The Dogs of War don't negotiate, The Dogs of War don't capitulate...You, are done, Soon, count on it.
God Bless America.

it is fast approaching the day when judicial means are no longer a sufficient remedy to government created violations of our Constitutional Rights.

Yes,just look at those weapons cache pics and vids they always show.I dotn know about you,but I cant just walk into Cabelas or Dicks and buy a new manufacture Colt full auto M4 with some M67a1 frag grenades and some M18a1 claymores.

The State Dept(with other blessings too) is the one that grants permission for exports to foreign nations.FN USA just cant ship M240s and M249s to Mexico via UPS without official permission from Uncle.

The Mexican police and military units get the weapons who in turn sell them to the cartels.