Barack Obama and the Murder of a Federal Agent 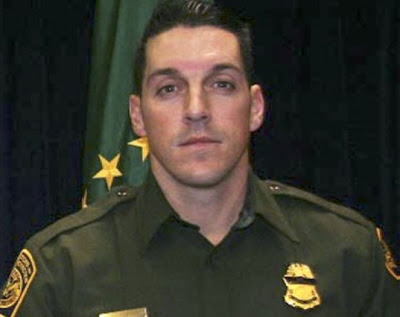 Terry was shot to death with one of two recovered AK-47 copy rifles intentionally made available by Obama Justice Department officials to known criminals. This case is under Congressional investigation and so far the Obama Whitehouse and Obama Justice Department has engaged in a massive cover-up. To say they’re stonewalling is an understatement. They are criminally obstructing justice.

In Arizona like ever other state, furnishing a weapon to a criminal who then uses it in a murder makes the person providing that weapon guilty of murder. There is no exemption for politicians, public officials at any level for this kind of criminal conduct.

The fact is, that the Obama Justice Department has knowingly and intentionally allowed thousands of high-powered weapons to be placed into the hands of criminals. The actual intent of these officials was to place the deadly weapons under the control of Mexican and Central American drug cartels.

When lower level agents of the BATFE became aware of the scheme they risked their jobs and possibly their lives to stop this scheme. They had no choice but to bring it to the attention of Congress and the media.

Unfortunately we may never learn what the final body count related to this outrageous crime may be before the carnage ends.

The State of Arizona has the absolute jurisdiction and duty to bring the matter before a Grand Jury. Indictments for Murder, Conspiracy, and Obstruction of Justice should be sought against any and all public officials facilitating the murder of Brian Terry.

The Arizona Attorney General as well as the Santa Cruz County Attorney has their work cut out for them. Let’s hope they do their job.