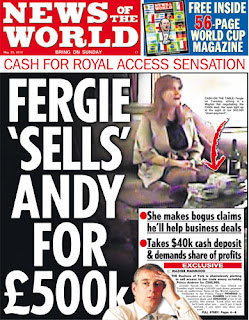 Los Angeles, CA—The shockwaves were felt everywhere because media giant, Rupert Murdoch shut down, News of the World. It seems that this sad turn of events happened because some overly aggressive and unethical reporters got and used information from hacked voicemail. This is a crime nearly everywhere in the civilized world. Journalists committing crimes to gather news casts a dark shadow on the entire industry. For my media friends in L.A. this is no small event.

Murdoch felt this conduct was so egregious he took it upon himself to end publication of this outrageously successful news organization. I can’t imagine the damage done to the workers and their families that were not a part of this troublesome scheme. They are all apparently only going to receive 90 day severance packages.

Nowhere on earth is the competition between news organizations stronger than in the UK. The competition is nearly always healthy and important in our civilization. Without a strong and observant media, government officials would never have to answer to anyone. A strong and free press is far more important than most people realize.

Spending time in Geneva, Switzerland with fellow journalists and documentary film makers this spring at the Human Rights Film Festival was a real eye opener for me. The journalists I met there routinely risked their lives around the globe reporting on government human rights abuses. They have all exposed horrible government secrets. The acts of a few rogues in the UK cannot be allowed tarnish the reputations of the thousands of honorable reporters, producers, photo journalists and news directors.

Strong, trustworthy and reliable journalists are needed to keep us informed about critical news happenings that affect our lives.

We are at a crossroads in America where the ruling administration has handed out uncountable billions calling it “stimulus”. I call it, abject corruption. Government needs watching more than ever. There is only one news organization that is watching our government these days and that’s Fox News. It is sad that they have no real competitor in that regard.

You don’t need to go outside the law to get information like those pretenders did at News of the World. You do have to pound shoe leather, the public records and lawful sources to expose crime and corruption.

I hope the competition always thrives in the news business and that reporters never act as burglars when they gather news.
Posted by Paul Huebl Crimefile News at 7/08/2011 03:51:00 PM

Email ThisBlogThis!Share to TwitterShare to FacebookShare to Pinterest
Labels: Journalism

Don't be too worried about the "News of the Screws" as it is called in the UK, Paul. Murdoch wanted to close it anyway. He has another paper, "The Sun", which does not yet have a Sunday edition. Expect to see the team that gave you the "Screws" start a "Sunday Sun" in a few months' time when everything's blown over.

Where has our precious privacy gone? Hacking out of control in England.

Now it's all about greed - Mr. Steed.

"According to one source with direct knowledge of Scotland Yard's evidence, News of the World journalists were systematically using private investigators who would break the law to obtain information, hacking into thousands of mobile phones and supplying raw material which was then converted into stories that made no reference to their real source."


" News Of The World" hacked itself out of business after 168 years. What a sorry end.

The most egregious is what happened in 2002 to Milly Dowler's cell phone. See interactive below.

"News of World" newspaper Journalists by 2006 may have accessed the phone messages of nearly 4000 PEOPLE, See link below...

THIS IS PRIVACY ITSELF THAT IS BEING A_HACKED...AND ATTACKED...

In the autumn of 2006, the police notified only a handful of victims that their cellphone messages had been hacked, even though there was evidence that News of the World journalists might have gained access to the messages of nearly 4,000 people. The top police officials learned they had been hacked after an 8-to-10-page list of potential victims was assembled that fall..., several former Scotland Yard officials said.

More on the hacking for Murdock newspapers

Regarding Diminishing Privacy and Bill of Rights on either side of the pond - although it seems Great Britain does not have a Bill of Rights, but nor does USA either.

Hugh Grant speaks about phone hacking at Britain's "News of The World" and other tabloids - two videos on this subject at this site.

If this is happening in Great Britain it can surely happen in USA- if it is not happening in secret already! (since phone hacking can be covered up for a while at least}

Hugh Grant says the "News of World" has disgusting & corrupt methods of news gathering, he also says all the British Tabloid newspapers are phone hacking, and that the government needs a puppet, who I suppose must be Rupert Murdock.

Today in London England - Rupert Murdock and his son have been summoned.

FBI is now investigating possible hacking of phones of 9/11 victims by Murdock company, but FBI probably not really involved - till the Brits have finished with Murdock et al? FBI opening an investigation is a place Holder.

This is a sad day for the British Police department who seem to be involved in this hacked out affair. Why have standards become so lax on privacy just recently?

Note: Police can be led into temptation just like any other human being, or can be forced by their superiors or other Officials to commit crimes. There should be a few resignations of Police Chiefs in USA also- if the truth be known.

Murdoch is being compared to Citizen Kane...

This is like watching a movie unfold, a character driven movie.

What a coincidence - Reminds me of the movie "The Ghostwriter" -as this is what happens to whistleblowers - whether they are are broadcasting the truth or not, as somebody else wants what they have to say covered- up, especially if it is incriiminating Too late now for cover-up so if there is foul play - the killing of this brave whisteblower may very well be a retaliation for reporting - police taking bribes for News of the World, and hacking.

Timing of arrest very strange - The arrest of Rebekah Brooks was on a Sunday just two days before she was scheduled to talk to Parliamentary Committee, so she may not be talking now since her arrest - and of course it takes two to tango as far as bribes and phone hacking!

Rebekah Brooks who has a Nicole Kidman sensuality about her, may have been arrested by the police so as to shut her up, so she can't talk at the parliamentary committee which is occurring in London England in just a few hours.

Who is guarding the guardians?

Transcript of the Parliamentary Meeting with Rupert Murdoch below

What was said and what was not said by Rebekah Brooks at this hearing.

Finally Murdoch's wife a hero for taking a swipe at shaving cream attacker.

Just another hilarious day for British Parliament all around.

Murdoch's Apology and Testimony in this video, he says he was in the dark, did not know, and is not responsible,...

News of the World (now closed) was less than 1 per cent of his company - which employs 52,000 people.

Murdoch's Apology and Testimony in this video, he says he was in the dark, did not know, and is not responsible,...

Sean Hoare, apparently was a phone hacker at one time, but later had a change of heart...

“One former editor said Coulson talked freely with colleagues about the dark arts, including hacking. “I’ve been to dozens if not hundreds of meetings with Andy” when the subject came up, said the former editor, who spoke on condition of anonymity. The editor added that when Coulson would ask where a story came from, editors would reply, “We’ve pulled the phone records” or “I’ve listened to the phone messages.”

Sean Hoare, a former reporter and onetime close friend of Coulson’s, also recalled discussing hacking. The two men first worked together at The Sun, where, Hoare said, he played tape recordings of hacked messages for Coulson. At News of the World, Hoare said he continued to inform Coulson of his pursuits. Coulson “actively encouraged me to do it,” Hoare said.

Hoare said he was fired during a period when he was struggling with drugs and alcohol. He said he was now revealing his own use of the dark arts — which included breaking into the messages of celebrities... — because it was unfair for the paper to pin the blame solely on Goodman. Coulson declined to comment for this article but has maintained that he was unaware of the hacking.

And Sean Hoare was interviewed by the police on Sept 15th 2010 but not arrested.