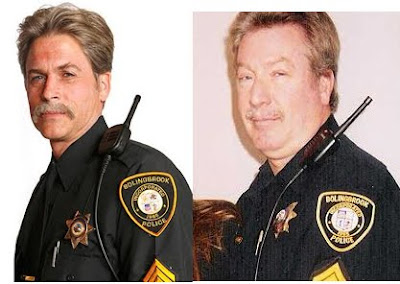 Joliet, IL—Retired Bolingbrook police sergeant Drew Peterson has sat in jail on a murder charge for well over two years waiting for a fair day in court. Our founding fathers were wise enough to give him and all of us the presumption of innocence. That presumption has been hijacked, at least from Peterson long ago.

The case against Peterson for murder is based on what’s always been inadmissible hearsay evidence in any American courtroom until the Illinois Legislature made a special law just for him. The untested law would allow the second and third-party gossip of the very people profiting from the death of Peterson’s third wife to be admitted to a jury.

The problem with the Peterson case is the use over-hyped and sensationalized trial material for fun and profit. Tabloid court news spinning organizations like that of Nancy Grace’s win big ratings and cold hard cash bringing viewers on board to watch Peterson get totally trashed.

Now a film based on a very poorly researched and written book is in production. Hollywood plans to tell America that Drew Peterson is a scoundrel and murderer before any jury is ever seated. Of course the pre-trial publicity has made Peterson the scorn of the true-crime addicts that don’t have lives. This is the same group that can’t seem to get enough Casey Anthony hate out of their system.

Countless Americans have died on battlefields so we could have a fair criminal justice system. Today too many Americans want their favorite media celebrities to tell them who is guilty, based on unsubstantiated chitchat and hateful sound bites rather than vetted evidence in a court room. This process turns any high profile case into a perverted sporting event for a large population segment of dysfunctional true-crime addicts.

As for the Peterson trial itself assuming that ever happens, thankfully Nancy’s Grace’s cameras are barred from all Illinois courtrooms.

Making a film and lots of profit after the trial would be fine. Making a film based on the outcome of a fair trial would be reasonable. Portraying Peterson as a cold-blooded wife killer before a jury has a chance to weigh and test the evidence is outrageous.

Making profit on the name and likeness of a private person who has simply been accused of a crime is dead wrong. Making a reasonably truthful film reflecting the trial outcome after the fact based on public record is another matter altogether.

As for the profit of Peterson related material reasonableness suggests that if Peterson would be convicted he’d have no right to any portion. If he’s acquitted or a court rules that indictment was improperly brought by a defective hearsay statute Peterson should have his right to profit from his name and likeness protected.

As for the gossip-mongering true-crime swine, they will only be satisfied with a trial by Tabloid TV along with the public torture and execution of Drew Peterson.
Posted by Paul Huebl Crimefile News at 7/15/2011 09:31:00 AM

Oh, dear Paul. You know I am an old friend. And you also know that I am "true-crime swine." In fact, I'm the one who writes the books. You know I have a very different opinion about this. With your permission, shall I leave a link to my very contrasting essay on the same question? While I'm still here, may I at least point out that veterans also fought for our freedom of speech, including outrage, speculation and, yes, gossip? That is closely related to fighting for our ability to have a voice in creating the laws on the books.

Well, heck, I'll just put up my link. You can remove it if you like. If I don't hold it against you for calling me "swine," I won't hold that against you, either! Paulmissedthepoint

Paul, this movie is the fruit of the poisoned tree. If the criminal posing as a states attorney had not been able to keep this guy in jail so long, there would be no movie and the public would have lost interest long ago. As it is, I think so few people will watch this movie it will be a non-event. After all, look at the washed-up actors playing in it.