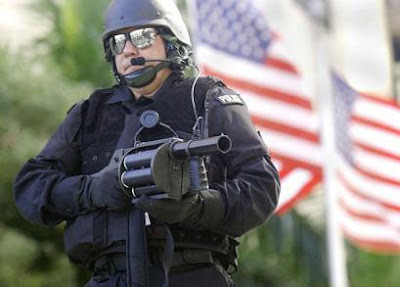 Washington, DC—For the past several decades America has allowed politicians to take us down the path of selling liberty for promised security.

Today the biggest threat to liberty in American history its Homeland Security Department and its massive power. This beast must be dismantled, defunded and destroyed before it’s too late. This un-American perversion of law enforcement is nothing more than the clear sign of the Police State we fought so many wars to prevent.

Every totalitarian, Fascist, Communist or Nazi state has sold their population that freedom was somehow dangerous and that security was for necessary public safety. The despots systematically disarmed their population before enslaving them and eventually murdering them.

I talk a lot about the National Socialists and Adolph Hitler because the photos, films and massive documentary evidence they left behind is unparalleled in world history. You need not rely on people’s faulty or biased recollections to know what happened inside National Socialism.

As Hitler was given power in Germany he was a wildly popular man, looked up to as a savior and role model. Time Magazine named him, Man of the Year. Liberty soon vanished as Hitler outlawed, civilian gun ownership, censored media and even thought. Searching of people, backpacks, vehicles, businesses and homes by government security forces was sold as necessary for everyone’s safety and security.

In the end of a twelve year reign six million Jews and nine million more good German citizens perished under National Socialism. There was no liberty or security for those left in Germany lucky enough to escape with their lives. The Soviet soldiers turned what was left of the German female population into personal sex slaves.

What’s past is prologue. This was the case in every government created by man at some point. It was the Nazis that documented the reality of every government that values security over liberty and privacy.

You can't balance the needs of security with freedom. Freedom is paramount or there is no security. Without liberty there is no public safety.

Real public safety begins and ends with access to the tools and training you need to protect yourself, family and community. Security is best left to the individual citizens rather than government.

Government is always about power, corruption and absolute control. Government breeds slavery, greed and celebrity for those in control. Government must be under the control of the people rather than the other way around. That’s the rub because government feeds on itself to gain growth and power.

When government get’s too big the best way to control it is to not feed the monster. Taxation must be under control of the taxed rather than the government. Taxpayers need to control what they pay, but for now the government makes that decision.

We must learn to say no to the TSA, BATFE, DEA, IRS, EPA, and the FBI. We have local law enforcement and don’t need to pay twice for law enforcement services. That’s especially true when their efforts are not needed or wanted in our communities. We can say no by defunding these government parasites.

We must defend liberty first, last and always. We can never fight hard enough to protect freedom and liberty. This fight never ends. We must always be ready to kill all enemies of freedom before they kill us. That includes those seeking or holding office that threaten our Constitution and Bill of Rights.
Posted by Paul Huebl Crimefile News at 2/03/2011 08:08:00 AM

American politicians need to fear treading on fellow American’s rights. Treason by politicians is not conduct that we protect. Those that dare tinker with our liberty risk their lives.

Stalin killed 60 million, yet Jewish controlled media and Jewish controlled Congress only shines their spotlight on the disputed six million killed in WWII and on pressing onward to ever deepening police state.

Why do the police chiefs nationwide get invites to Tel Aviv? Why does the Jewish lobby push for ever more surveillance and police presence?

ALL DEMOCRATS ARE COMMUNISTS SAYS:

so true Paul, so true

Keep buying weapons and ammo folks,it aint over yet.

We are losing this country and the sheep can't even see it. Paul keep telling it like it is, and don't back off.

The problem is that the sheepdogs have done their jobs too well and too invisibly.

The sheep have become so accustomed to being safe and secure within their flocks that, whenever the rare occurrence of unexplainable violence is visited upon them, they turn on the sheepdogs and bleat, 'why didn't you prevent this, you're supposed to be perfect!?!?'.

How many who viewed the movie 'A Few Good Men' applauded the Nicholson speech, and how many cheered when his character was arrested?

It will take a brick to the side of many of the sheeples' heads to wake them up to the fact that freedom is not, nor ever has been, free.

Those who already know this will be the ones who survive, to restore our American values to America.