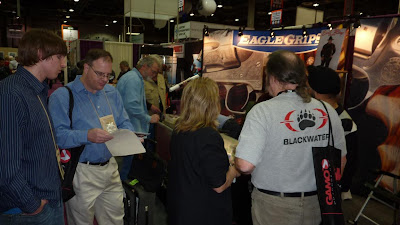 Today in all but a handful of Leftist run states ordinary law-abiding citizens are allowed to carry loaded, concealed firearms for self defense. These same people attend gun shows including the Massive SHOT Show (60,000 attendees) and the NRA Annual Convention (30,000 attendees).

All of these people with so many guns but there are never any shootings or violence connected with these events. The same is true of local gun shows. Please someone anyone, tell be about a criminal shooting at a gun show? The answer is there are none anywhere.

If gun liberty is as dangerous as we are led to believe by the gun rights haters there would by at least some evidence of violence surrounding these massive firearm handling events.

The truth is guns are only dangerous if you need one and can’t get one. Apparently one of the safest places in America is at a gun show! The real truth is we are all safer with more, not fewer law-abiding people armed with loaded firearms.
Posted by Paul Huebl Crimefile News at 2/20/2011 11:23:00 AM

Robert Heinlein, a science fiction writer, wrote that "an armed society is a polite society."

Paul, I hope that's not you with the pony tail. Nothing worse than old men trying to relive their youth.

I have much more hair than Mr. Pony Tail. I'm also much better looking and younger!

Mr. Pony Tail is actually an old man by the name of Brandon! :)

Your exactly correct CF.I have been going to gun shows all over the country for 30 years and have NEVER seen a criminal mis-use of a firearm.
I feel safer at a gun show than in a court house.

Nothing worse than old men trying to relive their youth.

Gun shows are safer than Englewood.